Win and yinz are in…

..with a little help from our friends!

The Steelers need three things to get into the post season:

Cam Heyward’s final words as the Steelers just beat the Ravens. “WHERE’S MY QUARTERBACK?!?” He found him at mid field and Ben and him had a brief word. 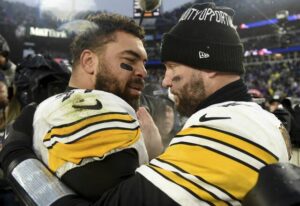 Cameron Heyward paused and darted his eyes up to the ceiling in contemplation. The Pittsburgh Steelers defensive captain couldn’t recall with precision the date of their most recent game against the Kansas City Chiefs.

“Was that three weeks ago or two weeks ago,” Heyward asked Sunday evening, “when we played Kansas City?”

It was Dec. 26, for the record. But that Heyward couldn’t remember was fitting. It might as well be a million years ago as far as the Steelers are concerned.

Fourteen days after a 26-point beatdown at the hands of the reigning AFC champion Chiefs left the Steelers looking feeble and anything but playoff-worthy, the Steelers were on the verge of pulling off the impossible after Sunday’s 16-13 overtime win at the Baltimore Ravens.

Unless the Sunday night game between the Los Angeles Chargers and Las Vegas Raiders ends in a tie, the Steelers (9-7-1) are headed to the postseason for the 14th time over the past 21 seasons.

“In that (Kansas City postgame) locker room,” Heyward said, “you could hear a pin drop.”

Tomlin walked into the news conference room with a grin as wide as the goalposts that Chris Boswell’s 36-yard field goal sailed through for the winning points.

When T.J. Watt came in moments later, he grabbed both sides of the podium and let out a “Woo!” before breaking into a happy chuckle.

“Everybody’s dancing. It’s a cool feeling,” Watt said of the locker room. “We put so much hard work into this, and it is an awesome feeling to win the game. We actually had to win to make the playoffs.”

That’s not all the Steelers needed Sunday. In addition to the Chargers and Raiders game finishing with one team scoring more points than the other, Steelers Nation was relying on the Jacksonville Jaguars to beat the Indianapolis Colts earlier Sunday.

Those Jaguars came into Sunday having lost eight consecutive games and 29 of their previous 31.

But Jacksonville came through, just as last week when the Raiders and Tennessee Titans defeated teams the Steelers were chasing.

And, of course, despite that improbable parlay, arguably the unlikeliest sequence of events of all was the Steelers winning their final two.

Headed into the Jan. 3 home finale against the rival Cleveland Browns, the Steelers had won only two of their previous seven games, falling by an average of 17.3 points in the losses. Their offense was struggling. The defense was getting gashed in the running game.

“There’s things we can clean up,” Heyward said, “but at the end of the day it’s about getting W’s. You are judged on your ‘W’s.’

“We have stuff we have got to clean up, but we are looking forward to cleaning it up.”

The Steelers started 1-3. Their soon-to-be 40-year-old quarterback is sapped of the mobility that made him a star, their offense went five consecutive games without managing a first-half touchdown (the first time in 81 years that had happened) and their defense was submitting an average of 198.6 rushing yards over a late-season, six-game span.

Just a week ago, few would have bet on the Steelers beating the their two most heated rivals over a seven-day span.

“It shows something about this team,” quarterback Ben Roethlisberger said, “that you can continue to fight and never give up.”

Roethlisberger has let it be known he very likely will retire at the conclusion of this season. His career now extends at least another week.

“We still have a pulse if you give us a chance,” Watt said. “To get us in ‘the dance,’ anything can happen, and that’s where we are right now. Hungrier than ever.” 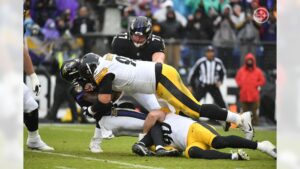 Cam had six tackles and a sack during the game. The sack was his TENTH of the season, and his second time with double digit sacks in a season!