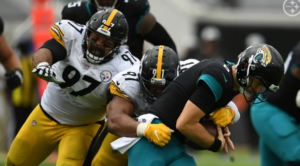 The defense held the Jaguars to a field goal on the opening possession of the game, and that was it. They held the Jaguars to 206 yards offense and pressured and befuddled Jaguars rookie quarterback Jake Luton into four interceptions — two each by safeties Minkah Fitzpatrick and Terrell Edmunds. (Gerry Dulac, Pittsburgh Post Gazette).

Defensive line: Running back James Robinson is Jacksonville’s best offensive weapon, and the Steelers held him in check with just 73 yards on 17 carries. By not allowing Robinson to control the game, the defense was able to put the Jaguars in difficult down-and-distance situations. That eventually led to a couple of sacks, including one from Stephon Tuitt. Nose tackle Tyson Alualu made his presence felt when he tipped a pass late in the first half that led to an interception. Grade: B (Ray Fittipaldo, Trib Live)

The #Steelers have 19 takeaways this season – 1st in NFL. They’re forced multiple turnovers in 8 different games this season. (Missi Matthews)