Taking down the Ravens

We are Ben Roethlisberger and 0!

That’s 7-0 for all of you non Steelers fans!

Chase Claypool said it best: “Losing? Never heard of her.” 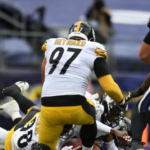 On a cold, rainy day at M&T Bank Stadium, the Pittsburgh Steelers were on their way to watching their unbeaten record and AFC North lead get washed away by the Baltimore Ravens.

The NFL’s most valuable player in 2019 threw one interception that was returned for a touchdown and a second that swung the momentum in the Steelers’ favor in their improbable 28-24 victory Sunday.

With the Ravens taking a 17-7 lead out of halftime, Jackson’s first pass was intercepted by rookie Alex Highsmith, and the Steelers used the gaffe as a springboard to a win that improved their record to 7-0 and knocked the Ravens to 5-2.

Cam left the game late in the 4th. We will update as news becomes available. Best wishes to our Captain!