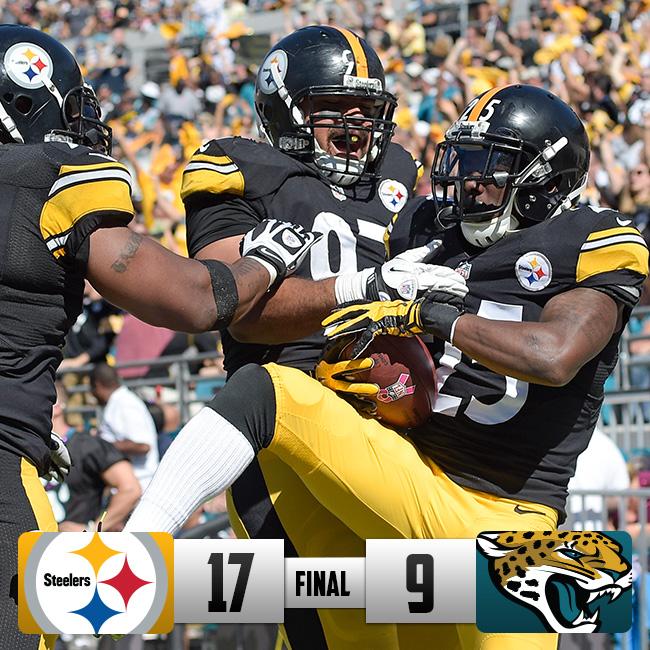 BIG STANDS: Unlike last week, when they couldn’t put up a second defensive stand against Tampa Bay, the Steelers held the Jaguars to seven plays and forced punts on their final two possessions after CB Brice McCain’s interception. “I love the way our defense rose up in that occasion,” said DE Cameron Heyward. (From Gerry Dulac, Pittsburgh Post Gazette.)

The Steelers traveled to Jacksonville looking to get back to their winning ways. Losing in the final seconds of the game last week still haunted them and the team was determined to make the necessary adjustments.

“I told the defense, ‘Thanks for bailing me out,’ ” Steelers quarterback Ben Roethlisberger said.

“I’m proud of our defense,” Keisel said. “We forced two turnovers … one, we scored on. … I don’t know a team’s winning percentage when the defense scores a touchdown, but it has to be in the 90 percentile range. That’s huge.”

It started with the run defense. The Steelers held the Jaguars to 56 rushing yards on 15 carries, the third consecutive game they have held the opponent to fewer than 63 rushing yards after being gashed for 191 in the opener against Cleveland and 157 in the second game against Baltimore.

Then, there were the turnovers. Cornerback Cortez Allen got the first with a second-quarter interception, the second consecutive game he had an interception. McCain got the big one, two plays after Roethlisberger was sacked and lost a fumble at the Jacksonville 17. McCain stepped in front of quarterback Blake Bortles’ sideline pass for wide receiver Allen Hurns and returned the interception for a touchdown with 11:32 left. McCain was in the lineup as the Steelers’ third cornerback for the second consecutive game because of Ike Taylor’s broken arm.

There still was nearly a quarter to play and the defense made the lead hold up. It forced a punt on the Jaguars’ next possession, then had to make another stand after the offense failed to convert a third-and-1 play on the Steelers 40. It might have been the defense’s most impressive series of the game. Hurns was pushed out of bounds by Allen after a 6-yard catch. Running back Storm Johnson was tackled for a 1-yard loss by Polamalu. Keisel batted down Bortles’ third-down pass, forcing a punt and giving the ball back to the offense, which, finally, did its share of heavy lifting by running out the final 4:05.