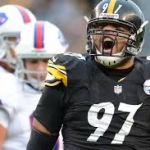 It was very telling when the Steelers sent a small contingent of current players to attend the June funeral for Chuck Noll that Cam Heyward was included in that group.

Naturally, there was Ben Roethlisberger, the franchise quarterback.

There was Ike Taylor, the longest-tenured player, a self-described yinzer and Steelers lifer.

There was Maurkice Pouncey, a three-time Pro Bowl center, the ink on his $44 million contract extension yet to dry.

And there was Heyward.

On a solemn, sweltering morning at St. Paul Cathedral in Oakland, with team and league dignitaries in attendance, Heyward didn’t look the least bit out of place. Heyward has emerged as one of the faces — and voices — of the Steelers.

As he begins his fourth season, his first as a full-time starter, Heyward is the unquestioned leader on a defensive line that is in transition.

Before last season, though, Heyward had been a bit of an enigma. A former first-round pick with enormous potential and pedigree, Heyward had appeared in 32 games (zero starts) with 23 tackles and 2.5 sacks over his first two seasons.

That changed last season when he took over for struggling veteran Ziggy Hood. He responded by posting career highs in starts (13), tackles (35) and sacks (five). In a season in which not enough went right for the 8-8 Steelers, Heyward’s ascension was one of the most positive developments.

At 6-5 and 280 pounds, Heyward is a mountain. One glance and you can see how his late father, Craig “Ironhead” Heyward, may have earned that nickname. Heyward is very approachable, polite — even pausing when a reporter fumbled over a question — but not the kind an offensive lineman would like to mess with.