Steelers get the “W” 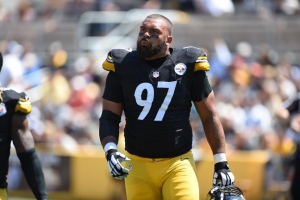 The Steelers had their first home preseason game today and they put on a show for the home crowd. The defensive starters played into the second quarter.

“I do like how we reacted and responded and we were able to dig ourselves out of a hole. “- Cam, from his post game interview.

Cam was not in long, but he had a tackle, a batted pass and he was one of several players in on the sack/safety which you can watch HERE.

Now that’s a collaborative sack. Cam Heyward got good push, James Harrison got to Rodgers, Spence and Dupree swarmed from the left.

The Steelers defense had SIX sacks against GB, along with a safety.

Two of the sacks were back-to-back

Cam had one great photobomb!

Thanks to Staci Thompson for the screenshot!

Read more on the game HERE.

Cam Heyward with a HUGE batted down pass to get the D off the field on 3rd down.- @jhinton11

Cam Heyward is a beast that was a smart move to lock him up, hopefully he will play his whole career as a Steeler! – @LivinLifeDifnt

Knocked down by Cam Heyward! – @Steelers

Please keep Maurkice Pouncey, Stephon Tuitt and Bruce Gradkowski in your thoughts and prayers. All three were injured during game. We wish them well and hope they are back soon!