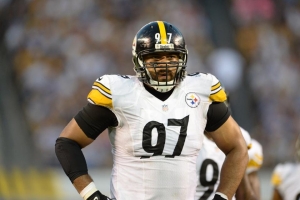 “I’m not going to sit here and tell you we’re the best defense ever, but we’re working to be. We know what Pittsburgh Steelers defense is all about. We’re trying to make our predecessors proud of us.” – Cam

And one big win.

The Steelers defense is beginning to show some swagger once again.

The defense was far from perfect in the Steelers’ 24-20 victory Monday night against the San Diego Chargers. After all, it allowed a sounds-worse-than-it-looked 406 yards, seemingly (again) had no answer for stopping an opposing tight end, and it gave up points on the Chargers’ final three possessions as it fatigued in an uncharacteristic steamy San Diego heat.

The Chargers scored on their first drive and on their final three. But in the eight possessions in between, the Steelers forced five drives that covered fewer than 10 yards and two turnovers. Their defense outscored the Chargers offense in that time, 7-0, thanks to an Antwon Blake 70-yard interception return for a touchdown.

“Not only the defense, but as a team, we knew this was a must-win for us,” Blake said. “So we knew we couldn’t go home back to Pittsburgh without a win.”

Truth be told, the defense is what gave a struggling Mike Vick and the Steelers’ offense a chance to find itself late after its own run of mid-game ineptitude.

The defense was thought to have entered the season as something of a weak link what might hold the Steelers back. Instead, it has kept it in two games in which the offense was forced to use a backup quarterback.

“I feel like we’re starting to contribute more every week, getting better — and making plays at big moments,” linebacker Arthur Moats said. “We definitely feel like we’re on the rise and that’s where we want to be. All season we’ve got to continue to be a group on the rise.”

With the exception of Baltimore’s Justin Forsett, who had 150 rushing yards in an overtime Ravens victory Oct. 1, the Steelers’ have regained their intimidating run defense it rode throughout the decade of the 2010s.

Running backs other than Forsett this season have combined for 217 rushing yards on 78 carries for a 2.8 average.

Even with Forsett’s gaudy numbers added in, opposing running backs have 399 rushing yards in five games and are averaging a mediocre 3.5 yards per carry, Monday, Chargers running backs Melvin Gordon (15 carries for 42 yards) and Danny Woodhead (four for 10) combined for 52 rushing yards on 19 carries, a 2.7-yard average.

“It was super-frustrating last week when we saw Forsett have that type of performance on the ground,” Moats said. “It was more on us, being out of our gaps and little technique errors.

“So we put an extra emphasis on that this week, and it showed up tonight.”

One of Gerry Dulac’s top moments from the game:

Blake’s take: In a game in which it looked as if the Steelers would need a defensive score to win, CB Antwon Blake delivered with a 70-yard interception return for touchdown that gave the Steelers a 10-7 lead late in the third quarter. Blake cut underneath a pass intended for Chargers WR Malcolm Floyd and headed for the right sideline before cutting back inside the 10 to the end zone.

I think a blocking sled could slow Cam Heyward down better than the Left Guard for the Chargers!

Cam Heyward is a BEAST inside…Just overpowered and pushed his man into Rivers..- Bob Pompeani

Not sure Cam Heyward played a better game than this one. He utterly destroyed C Chris Watt. Watt got walked back into QB, then tripped Cam.- Neal Coolong

Cam Heyward played last quarter and a half last week on one leg. Dude is an animal. –  Alex Kozora

I think I saw Cam Heyward on the sideline ONE time last night..That’s what you call a warrior..the great Iron Head is def proud! – Steven

And, Monday Night Football commentator Jon Gruden could not say enough about 97:

They’re 300 pound every down monsters! Gruden on Heyward and Stephon Tuitt

Heyward forces a lot of penalties (on other teams) with his activity inside.

Gruden also threw out a message to Steelers Nation saying:

Heyward had BETTER be in the Pro Bowl this year!

Challenge accepted Mr. Gruden! Once the Pro Bowl ballot is out, we will let you know. 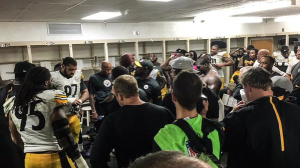 Congratulations to Mr. Heyward and the team on their great win! Onward and upward!

The Steelers take on the Cardinals on October 18.