Steelers come from behind to defeat the Cardinals 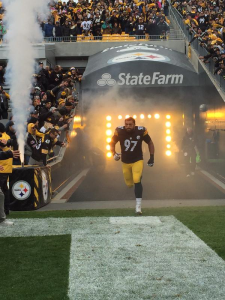 There was a lot of media talk this week about former Steelers offensive coordinator, Bruce Arians returning to Pittsburgh this week as the Cardinals head coach. Also, the team would be facing Cardinals QB, Carson Palmer who was the former Bengals QB, so the Steelers were well aware of his talent. Most did not give the Steelers a chance, with the Cardinals high powered offense, ball hawking defense, and the loss of Big Ben.

The Steelers; however, did not buy into any of the chatter. They simply took the field and focused on getting the win for theiome crowd.

STORYLINE
This was how Coach Mike Tomlin saw the game against the Cardinals unfolding: “We have to do a great job of protecting the football. They feed off turnovers. If they’re getting turnovers then we’re going to be in a situation that’s uncomfortable for us, because we’re going to have to try to match scores with a potent offense using a backup quarterback. That can’t happen, and so we have to take care of the football. On defense, we have to slow their offense down. If they move the ball some, we have to make them kick field goals. That’s what the St. Louis Rams made them do. The Cardinals went up and down the field on the Rams some, but the Rams made them kick five or six field goals over the course of the game, and that was a formula for winning. Defensively, we have to play good ball when the field gets short, and offensively it’s paramount that we take care of the football.”

HOW THE STORYLINE PLAYED OUT
Job 1, according to Tomlin, was to protect the football, to avoid the kinds of turnovers the Cardinals had been using as a springboard to blowing out four of the first five opponents, and that was accomplished.

Mike Vick might have completed only 3-for-8 for 6 yards in his one half plus one series of play, but he didn’t throw an interception to a Cardinals defense that came into Heinz Field leading the NFL with 11. When Vick injured a hamstring and had to be replaced by Landry Jones, the Steelers still protected the football in flawless fashion. Jones completed 8-of-12 for 168 yards with two touchdowns and no interceptions. And Jones was more aggressive throwing the ball down the field than Vick.

The second part of Tomlin’s formula – holding the Cardinals to field goals at the end of their offensive possessions – also came true, except on three of the Arizona possessions that ended with the Steelers defense taking the ball away.Watch Full Movie Online Streaming Online and Download

The Cardinals ran 66 offensive plays – to 53 for the Steelers, by comparison – and they gained 469 yards of total offense. Their quarterback, Carson Palmer, passed for 421 yards but completed only 51 percent; John Brown caught 10 passes for 196 yards; and Larry Fitzgerald caught eight passes for 93 yards. Palmer completed passes of 45, 44, and 32 yards, but the Cardinals were just 1-for-4 in the red zone. And they were minus-3 in the turnover ratio.

And, from Ryan Recker, News Anchor/Sports Reporter at WTAE: Steelers defense has held opponents to under 20 points in 3 of their 6 games.

Next man up was the theme of the game:

Michael Vick was injured during the game, so Landry Jones got his chance to show what he could do…and boy did he show us:

Jones replaced the injured Mike Vick early in the third quarter of Sunday’s game against the Arizona Cardinals and led the Steelers to four consecutive scoring drives, including an 88-yard game-clinching touchdown pass to Martavis Bryant with 1:58 left as the Steelers improved to 4-2 with a 25-13 win at Heinz Field. (Pittsburgh Tribune-Review).

Sadly, Steelers tackle, Kelvim Beachum suffered a season-ending injury. Alejandro Villanueva stepped in to replace him to help the O-Line.

Stephon Tuitt also left the game with a reported knee injury. L.T. Walton came in as a back up to Tuitt. 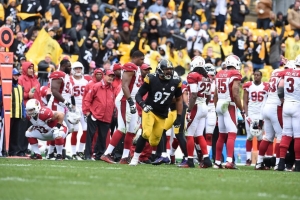 Cam was once again disruptive to the quarterback and offensive line the entire game.

Please keep Kelvin Beachum in your thoughts and prayers. We know he will be back better than ever!