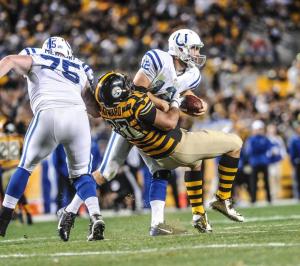 Teresa Varley, Steelers.com had a chance to sit down with Cam for a short Q & A:

How different a player is Cam Heyward today vs. Cam Heyward as a rookie?
I have definitely grown schematically, physically, mentally, and intellectually. All of those things are taken into account. I have gotten to experience a lot my first couple of years here. It made me a better player because of it.

This year alone you seem to be having your best year. Anything you changed or is it natural progression?
Early on it was all about staying ready. Now I have had the chance to hear from guys like Brett Keisel and Aaron Smith about things. You are not just reacting to what they are going to do. You know what they are going to do and responding. I think as an older player you learn that. You aren’t just playing off of instincts. You are already countering before they actually do something.

You mentioned learning from guys like Brett and Aaron. How much do you try and help the younger guys now?
I want to make sure all of the guys are on the same page and that means talking to them a lot, making sure they understand. As a leader you want your rookies to be more talkative and communicate early on so there is no doubt in what they are thinking. It’s little things like that. I am hard on them in practice so we don’t have to worry about it during games.

You mentioned the word leader. Do you see yourself developing as a leader on the defense and do you have to do a little more with Brett’s injury?
I am just going to try and lead by example and encouragement. I am not going to replace Brett Keisel, but I can be my own kind of leader. If that means keeping guys accountable, keeping myself accountable and leading by example, that is what I will do. 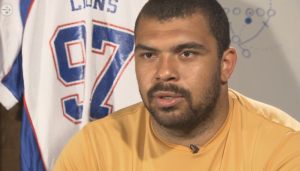 Also, from the Steelers:

Steelers defensive end Cam Heyward talks about growing up in Pittsburgh, his father, and playing high school football in Georgia.

Cam believes in this quote:

“If you reach out to the stars you might land on the moon.”