“I owe everything to Keis.” 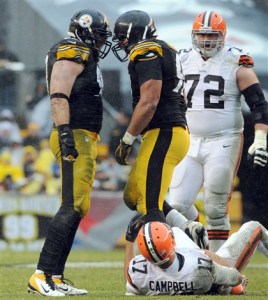 From Ron Cook’s article in the  Pittsburgh Post -Gazette:

Keisel molds Heyward into a force

It is clear now why Steelers defensive end Cam Heyward was nearly in tears when teammate Brett Keisel went down and out for the season with a torn triceps Nov. 30 against the New Orleans Saints.

“He’s my Obi-Wan Kenobi,” Heyward was saying Sunday after the Steelers beat the Atlanta Falcons.

In case you’re not a Star Wars fan, Kenobi was a legendary Jedi Master. He is famous for training Anakin Skywalker and mentoring Luke Skywalker.

“Even when I wasn’t playing, Keis was teaching me and getting me ready,” he said. “I sat next to him in the meeting room every day. I’m still sitting next to him. He’s still teaching me.”

It’s a special relationship the two have, Keisel passing on the knowledge he has gained in 13 NFL seasons to Heyward — Ironhead’s boy — who is becoming a star in his fourth year in the league.

“Becoming a star? He is a star,” Keisel said.

They say a teacher’s greatest reward isn’t financial, but rather the joy that comes from seeing a student excel. So it is with Keisel when it comes to Heyward. Keisel watched him come into the NFL as the Steelers’ No. 1 draft choice in 2011, thinking Heyward one day would take his job. He watched Heyward struggle to get on the field, not getting his first start until the fourth game the 2013 season, his third in the league. He heard the whispers that Heyward was a bust even if he couldn’t believe what he was hearing.

Heyward made an impact in the 27-20 win against the Falcons. In a span of four plays in the third quarter, he batted down a pass by quarterback Matt Ryan, then tackled running back Steven Jackson for a 2-yard loss on a second-and-1 play at the Steelers 2. Other than cornerback William Gay’s 52-yard interception return for a touchdown in the second quarter, the play on Jackson might have been the Steelers’ biggest defensive play of the game. The Falcons had to settle for a field goal, cutting the Steelers’ lead to 20-13.

“It’s fun to just be out there playing,” Heyward said, thinking back to his two-plus years as a backup and special-teams player. “You want to be a part of the pressure situations. You want to be the guy to step up.”

Heyward added a quarterback pressure in the fourth quarter and leads the Steelers with 17. He also leads the team with five sacks, which is a remarkable achievement. Usually it’s the outside linebackers who get most of the sacks in the Steelers system. They didn’t get to Ryan Sunday.

“He wants to be great,” Keisel said. “There’s a price that comes with that. You’ve got to work for it. He’s putting the work in.”

Heyward has become the Steelers’ best defensive player — better even than linebacker Lawrence Timmons — although he never would admit that.

It was time for the punch line.

“He had a really good teacher,” Keisel said, grinning through all that hair on his face.

Keisel was kidding, of course.

“I owe everything to Keis.” 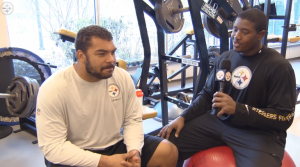 Kelvin Beachum talks to Heyward about what he does to stay healthy and in shape all year long.