Heyward: “We rally around him”

The MRI on Sunday night revealed Ben Roethlisberger had an MCL injury to his left knee. There is no timetable for his return, but Ben is a competitor and we are confident he will do everything in his power to return at the appropriate time. 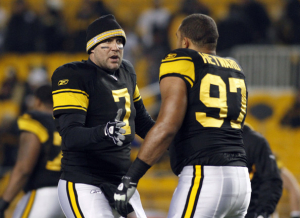 “We rally around him. He’s our captain and we’re going to pick up the slack in other ways. We don’t want there to be any let-off because he’s out. We want him to come back and do something special, and we’ve got a chance next Thursday.

“Ben’s injury is a tough one because he’s our starting quarterback of this team, but it’s time for other guys to step up. We’re not going to shy away from any competition. We accept every challenge. Through this journey we understand that guys are going to get hurt.”

Thanks to Teresa Varley for the article!

More from the Steelers win:

The Rams finished with 71 yards rushing but 24 came on a jet sweep by WR Chris Givens in the fourth quarter. Otherwise, the rush defense was more than solid, allowing an average of 2.8 yards on the other 17 carries. DE Stephon Tuitt had another sack, two tackles for loss and two pressures. He also had a nice hustle play beyond the line to keep a dump pass to a 7-yard gain.

And, Mark Kaboly, Trib Live, gave his grade on the D-Line:

LINE: (A) — What was the most impressive was the way they ran to the ball. The unit was short a man with Daniel McCullers out, but still got a sack from Cam Heyward and helped keep the Rams’ running game to 3.9 yards per carry.

Remember this kids…even adults get graded!