Heyward: ‘We just have to finish…’

We just have to finish. We talk about being a team on the rise, but if we don’t finish for four quarters, instead of three-and-a-half, we’re going to get the same result. Every team is good in this league and when you have your foot on the throat, you have to finish the game. This can be a big learning lesson or it can be our Achilles heel the rest of the season. We have to grow from this. Look at the Baltimore game. If we get another stop in the fourth quarter, we win the game. I don’t think it’s a trend, but we have to learn from this. It can’t be something that lingers and sticks around. – Cam, from his post game interview.

Gerry Dulac, Pittsburgh Post Gazette had this to day about the defensive line:

There was no lack of effort or big plays from the defense, even on the defensive line. Cam Heyward controlled the line of scrimmaged, had a tackle for loss, disrupted a pass attempt when he hit Andy Dalton’s arm and blocked a field goal. Steve McLendon played end in the 3-4 defense and had a sack. And Dan McCullers had his most extensive and productive game at nose tackle.

Cam was considered for Player of the Week honors from Steelers Digest. The honor went to Heath Miller, who finished with a team-best 10 catches for 105 yards.

In case you missed Heyward’s awesome field goal block, you can watch HERE. 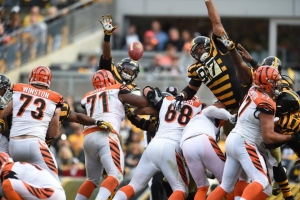 Wonder what you get for a blocked field goal?

A BIG kiss from Coach Tomlin!

Tweets of the day:

I genuinely don’t know what Steelers fans think of Cam Heyward, but man he is one heck of a football player.

The motor of Cam Heyward is fantastic, pass rushing Dalton then turns around to chase down Bernard and manages to make the tackle! – Jack Matthews.

I think we need to give Cam Heyward the ball in goal line situations like the old Refrigerator Perry. It is his destiny. – Matt Kozlowski

Thoughts and prayers are with Cam’s teammate Le’Veon Bell who suffered a knee injury in the game.