Heyward: ‘We gotta grow from this…’

Cam spoke to the media about the defense after the loss to Seattle last night: 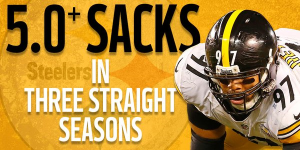 SPECIAL TEAMS PLAYER OF THE WEEK

Cameron Heyward, defensive end, Pittsburgh. Seahawks scored a touchdown in the third quarter to draw within 21-20, and on the PAT, Heyward leaped in the air and got a piece of the Steven Hauschka boot to prevent the ball from going through the uprights. The Steelers kept the one-point lead well into the fourth quarter. Huge play.

Cam has had 5.0+ sacks in three straight seasons! 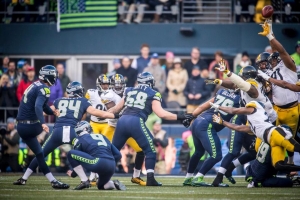 While he’s been a menacing force on the defensive line, Heyward has also become a maven on special teams. Sunday’s block marked the second blocked kick of the season for Heyward, who also blocked a Bengals’ field goal attempt back in Week 10. Heyward also made an impact on defense, recording his fifth sack of the season on Seahawks’ quarterback Russell Wilson. Heyward also had three tackles in Pittsburgh’s 39-30 setback to Seattle.

The Steelers will need Heyward to keep his level of play up this upcoming Sunday, as Heyward and his teammates will partake in a pivotal matchup against the visiting Colts at Heinz Field.