Heyward in line for second contract with Steelers 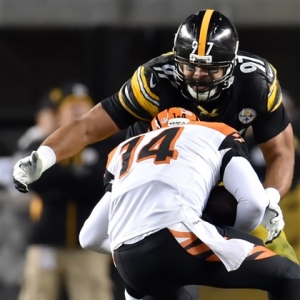 “The Steelers greats, they don’t go anywhere else, That’s one of my goals — to be a Steelers great — and that means being here for the rest of my life, football and after.”– Cam

Almost one year ago, an emotional Maurkice Pouncey stood at the podium inside the media room at the Steelers training facility and spoke about signing a five-year, $44 million contract. Pouncey, the team’s first-round draft choice in 2010, signed his second NFL contract a month before training camp began and avoided any drama that can go along with an unresolved late-summer negotiation.

“It was a blessing,” the center said. “That was an emotional day for me. The Steelers showed me how blessed I was and how blessed I am to be here.”

Heyward would like to get his deal done sooner rather than later.

“I’m not here to ruffle feathers or make waves,” he said. “I’m not one of these guys who thinks about their contract while I’m here. I would love to have it done as soon as possible, but I’m not in any rush. I’ll let the cards fall where they might and continue to improve.”

Heyward not only would like to sign a second contract with the Steelers, but he also wants to follow in the footsteps of recently retired teammates Troy Polamalu, Ike Taylor and Brett Keisel.

“The Steelers greats, they don’t go anywhere else,” Heyward said. “That’s one of my goals — to be a Steelers great — and that means being here for the rest of my life, football and after.”