Heyward honored with ‘The Chief’ award

Cam has once again been selected for ‘The Chief” award for his cooperation with the media. He also won it in 2019. The winner is chosen by the Pittsburgh Chapter of the PFWA.

Second time in three years and third time overall Steelers captain Cam Heyward has been voted as the Chief Award winner for cooperation with local media. Plenty of worthy candidates but Cam talks after every game, win or lose, respects every question, and answers honestly. 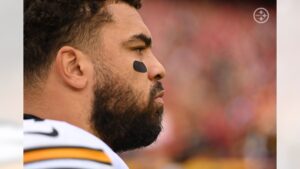 It’s the time of year when honors are handed out and that was the case when Cameron Heyward and Najee Harris were both honored by the Pittsburgh Chapter of Pro Football Writers of America. Heyward is the winner of ‘The Chief’ Award, while Harris won the Joe Greene Great Performance Award, presented to the team’s top rookie.

‘The Chief’ Award, which was established in 1988 in honor of Steelers’ founder, Arthur J. Rooney, Sr., is presented annually to a member of the Steelers’ organization that best exemplifies the spirit of cooperation with the media that he embodied. This is the third time Heyward has won the award, previously doing so in 2014 and 2019.

“I appreciate your job, it’s not easy,” said Heyward after being presented with the honor. “I just try to be honest.”

Heyward said he was trained while at Ohio State how to deal with the media, and it’s still benefiting him.

“Not only dealing with the media, but creating relationships and being able to talk open and understanding that you have a platform and you can use it for good or bad,” said Heyward.

With NFL locker rooms still closed to the media because of the COVID-19 pandemic, Heyward always makes himself available to the media during the week and postgame, never saying no to requests and standing tall in victory and defeat.

“I am not the happiest person after we lose,” said Heyward. “I tend to take it personally and individually, that I let my team down that we weren’t able to do it. I know it’s a cliché thing where it’s give yourself five minutes, collect your thoughts and try to muster up something together. But that’s what I tend to do.”

And when he speaks, he speaks from the heart because that is who he is, showing the leadership qualities he has become known for among his teammates, coaches, staff and media.