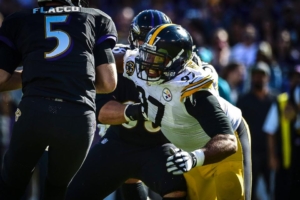 Cam Heyward was named the AFC Defensive Player of the Week for his performance in the Steelers 23-9 win over the Baltimore Ravens on Sunday.

Heyward was disruptive all day, sacking Ravens’ quarterback Joe Flacco twice. Heyward stuffed running back Alex Collins for a one-yard loss, forcing a fumble, and came up with the recovery. The turnover eventually led to a Steelers touchdown, and a 13-0 lead in the second quarter.

“I’ve got to keep challenging myself week-in and week-out,” said Heyward. “I’m not going to be satisfied with this one game. I have to get better in different ways.”

Heyward added four tackles, including three solo stops, and was a key factor in holding the Ravens to only 82 yards rushing and 235 yards in the air.

For the season Heyward has three sacks, improving his career total to 28 sacks.

“He’s just everything you want a guy to be,” said Coach Mike Tomlin. “The guy is here every day. He loves the lifestyle, but he also loves the life. The drudgery that’s associated with professional football, the commitment, you see it in him over the course of a 12-month calendar. It’s every day for him whether it’s October or whether it’s May, and that’s probably the chief thing that makes him the special guy that he is.”

This is the first time Heyward was named AFC Defensive Player of the Week.