The Steelers lost a tough one to division rivals last night in overtime. 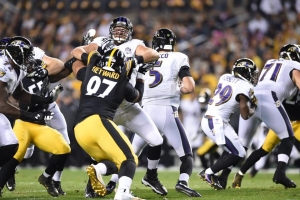 What 97 had to say after the game:

Is this as frustrating regular season loss as you’ve had?

Every game is frustrating when you lose.

The way this one went, though?

This is just as frustrating as the first game. We learn from it, but we are not here to point fingers. We accept blame. Offense, defense [and] special teams, we all have to get better. There were too many times where we had our foot on their throats, and we just didn’t do it.

Was there much conversation about not going for the field goal late?

How do you think the team responded without Ben?

Good, but we didn’t get the win. We want this to be a good situation when he comes back. So we’ve got to start next week with San Diego and move on. We’re going to watch this tomorrow and study what we did wrong today.

Cam had a huge game with seven solo tackles, a sack and a forced fumble!

Media quote of the game:

If there was an aggrieved party in black-and-gold on Thursday night, it was the Steelers defense. Five sacks of a quarterback who had been sacked just twice in the first three games, plus two takeaways, plus five passes defensed, plus turning the ball over on downs three times, and only allowing two touchdowns should have been good enough. It represented another step forward as a unit, and it had young up-and-comers such as Stephon Tuitt and Sean Spence and Ross Cockrell take steps forward as individuals. (Bob Labriola, Steelers.com)

So proud of my Cam Heyward tonight! He gave it his all. — Charlotte Heyward (Mama Heyward)

Heyward isn’t giving up though. Playing his best at the game’s biggest moment. – Alex Kozora

Thanks for playing your heart out last night @CamHeyward. The defense played a fantastic game. – Max Hannusch 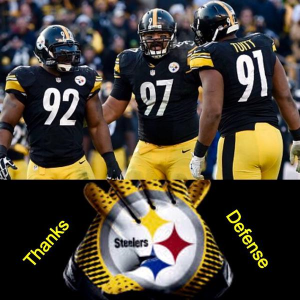 Cam, you were the leader last night setting the tone for the game. You gave your all for 60 minutes plus OT. – Sharon

Thank you to Cam and the team. We will regroup and get better! – Susan

Win or lose, we know our team gives their all every game.

They will learn from what went wrong and build upon what went right!
Onward and upward!
The Steelers will face the Chargers on October 12.