Heading into the bye week with a “W” 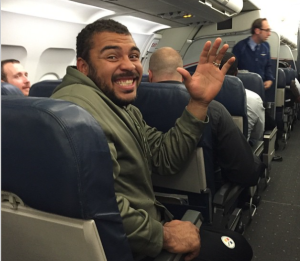 Heyward is all smiles after the MNF win! Photo- Marcus Gilbert

It’s always great to win heading into the bye week.

We got a good win!! Great team effort!! Get some rest Steeler Nation!- Heyward

Matt Bowen (@MattBowen41), NFL writer for Bleacher Report said it best: “That’s how you close out a game in the NFL.”

The Steelers defeated Tennessee and are now in 2nd place in the AFC North.

The game started with a great play on defense as William Gay intercepted Titans QB Zach Mettenberger and ran it back for a 29-yard touchdown.

The game ended on the great play of Big Ben and Le’Veon Bell who controlled the majority of the fourth quarter. Bell ended the game with 204 rushing yards.

From Lance Zierlein (@LanceZierlein), Radio host on Sports Talk 790 in Houston: “This is one of the most dominant “imposing of wills” I’ve ever seen. Ever”.

Heyward was disruptive all night against the Titans QB and Offensive Line.

It was amazing to see the Black and Gold take over the stadium in Tennessee last night. Hearing the crowd noise was the best.

Great job Cam! Such a blessing to see you guys live & to have you all return home safe & sound.– Erin (SteelersFanTN)

I played little league with Cameron Heyward and he was an animal… 6ft tall at 11 years old; he’s been unblockable this season– T-Bob Hebert

Ya’ll gave us heart attacks & panic attacks! Thanks for the win though! — LA Ballet Princess