Getting the W in Baltimore 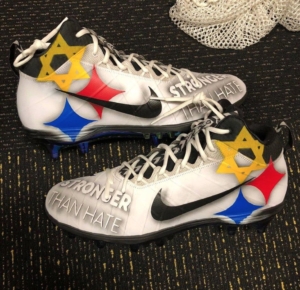 The Steelers remain in the top spot for the AFC North with their win over Baltimore today.

The offense didn’t commit a turnover and chewed up the clock with a series of lengthy drives. The defense made stops inside the red zone and got off the field on third down.

The game held Sunday at M&T Bank Stadium played out much like it did five weeks ago at Heinz Field.

With one obvious exception.

It was the Pittsburgh Steelers – and not the Baltimore Ravens – imposing their will and winning the line of scrimmage in the AFC North rematch.

The result was a grind-it-out 23-16 victory for the Steelers that increased their winning streak to four as their season reached the midpoint.

“We had good balance. It was a team-effort win,” guard David DeCastro said. “Usually that is (the Ravens’) recipe.”

By avenging a 26-14 loss to the Ravens at Heinz Field on Sept. 30, the Steelers improved to 5-2-1. They also maintained their edge in the AFC North over the 5-3 and idle Cincinnati Bengals while the Ravens, who were 3-1 just a month ago, lost their third in a row and fourth in five games to fall to 4-5.

The defense held the Ravens to 268 yards, marking the fourth consecutive game an opponent gained less than 325. The Ravens were stopped twice at the Steelers 5 in the first half and had to settle for field goals while scoring a touchdown just once on four trips inside the red zone.

Read more on the win from Teresa Varley, Steelers.com.

This will be a short week for the team as they take on the Panthers for Thursday Night Football.