Draft worked out perfectly for Heyward

With Draft Day upon us, how about taking a look back to when #97 was selected (thanks to Teresa Varley):

“The Steelers were everything for my family. My mom is from here. My grandparents live here. Aunts, uncles, cousins live here. You name it, they are here. We never put it all together that I could wind up with the Steelers. My mom had a closet full of Steelers gear before I was a Steeler. When it happened she went digging in the closet for stuff. When it came full circle it was a blessing. 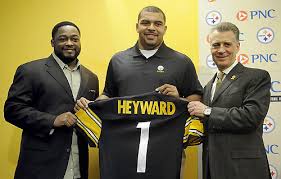 Leading up to the NFL Draft, current and former Steelers’ players will be sharing their Draft Day Memories, from the time they went to the NFL Scouting Combine, through the moment they were drafted. In this installment, defensive lineman Cam Heyward shared his story.

“The experience with the Combine, as much as it wasn’t physical because I couldn’t do the drills, it’s mentally draining as you are portraying your message, what you are about, that you are a student of the game, your aspirations and what you want to do in the game and how you are going to do that.

“I would say it is always refreshing to talk to a team you idolized all of your life. That interview was made for me so I wanted to knock it out of the park.

“I was able to work out on my pro day. It was the first time I came back from the injury to be able to do something. To be out there in front of a bunch of scouts and be back being a player at this level was great. It was tough not competing at the combine. That is just the competitor in me. When I didn’t get to compete against all of the other great talents, I never got to measure myself against them and I get to do it now in games each week.

“I didn’t know the Steelers were going to take me until I got drafted. I never really thought the Pittsburgh Steelers are where I was going to end up. It worked out perfectly. Draft day came around they were talking about me going from 15-32. There were factors going into it. I was biding my time waiting. When I saw the ‘412’ area code on my phone I was happy. 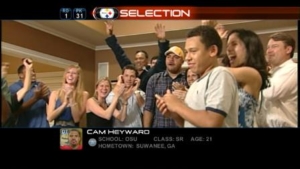 “I declined going to New York for the draft. I thought it would be better to celebrate with my family. They helped me get this far, why not celebrate with them. You don’t get that many seats when you go to New York. We stayed home, invited a bunch of friends and family. We just waited the whole night.

“I got an email from one team saying we are thinking about selecting you so just be ready. Thank God it didn’t work out. We were in my basement and the Steelers called my phone a few times and it didn’t ring. It finally rang and I was there to pick it up. Coach (Mike) Tomlin said we are thinking about drafting you. I told him good choice. There is a sense of euphoria where you are so excited. I came full circle and came back to where I was born and could be around my family.

“I was under the impression that after you talk to Coach Tomlin you are done so I just hung up the phone. Wrong move. They called back and said we have other people for you to talk to. I went outside and talked to Coach (John) Mitchell, Mr. (Art) Rooney, and Coach (Dick) LeBeau. I received a text from Hines Ward, Ben (Roethlisberger), welcoming me to the Steelers. When you see guys that are prominent in the organization reach out to you, you feel very welcomed and realize they are more than what you thought. I am blessed to have a lot of role models in this organization to help me grow. 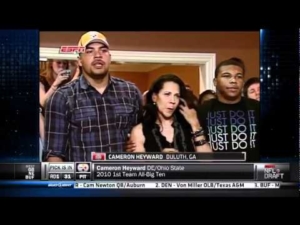 “Seeing your name going across the board, understanding you got picked in the first round, it’s a true pleasure.

“The Steelers were everything for my family. My mom is from here. My grandparents live here. Aunts, uncles, cousins live here. You name it, they are here. We never put it all together that I could wind up with the Steelers. My mom had a closet full of Steelers gear before I was a Steeler. When it happened she went digging in the closet for stuff. When it came full circle it was a blessing.

“It’s a dream that never stops. It’s a goal you have in mind and you have to understand it’s not done now. It’s not even half the battle. It’s just putting on the sword and protection for going out to war. It’s not done. You have to understand now it’s time to leave my mark. It was a reward for working hard in college, now it’s time to work more.”

Check out the path to Pittsburgh for our QB, Ben Roethlisberger!