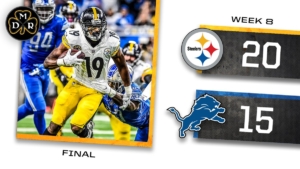 A game where JuJu finds out he doesn’t need a bike to fly, the defense takes a huge stand and Heyward ties a Steelers record.

The defense let Tomlin know during Sunday night’s 20-15 victory over the Lions that the message had been received.

“I felt like we did a good job of responding,” Davis assessed.

The response of the defense was to hold the Lions to zero touchdowns in five red zone possessions.

Twice the Lions turned the ball over on downs, including once in the third quarter after they’d achieved a second-and-goal from the Steelers’ 1-yard line.

“Coach challenged us this week,” defensive end Cam Heyward said. “We had been giving it up in the red zone a little bit, especially our goal line (defense).

“We got that stopped and didn’t look back.”

The Lions tried five runs in the Steelers’ red zone and gained 4 yards. Quarterback Matthew Stafford completed two of 11 passes in the red zone for 6 yards and was sacked once.

The Steelers had their theories.

Heyward: “Technique, knowing what you gotta do, penetration and just heart.”

On Juju: The moments not too big for him. You appreciate the young energy he brings.”- Cam

(Cameron Heyward has tied Brett Keisel for the 3rd-most sacks by a #Steelers d-lineman since sacks became an official stat in 1982.)

Missed the big stands and plays? Or, just want to relive it? The Steelers have you covered HERE.

Getting the A for the W:

Two big goal-line stands did it for the Steelers as Javon Hargrave on third down and Tyson Alualu on fourth down made big stops. The Lions, who haven’t had a 100-rusher in 58 games, didn’t look like they would end that streak after rushing for just 26 yards and not having a run longer than 8 yards in the first half. They finished with 71 yards on 22 carries. Cam Heyward and Alualu had the only sacks.