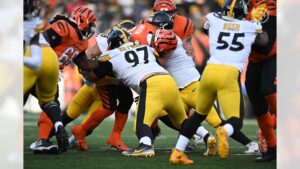 Not the game we expected, but I know Cam and the leaders will help get the team back on track.

Cameron Heyward speaks to the media following today's game against the Bengals. pic.twitter.com/bUadpFUrz9

Also considered (for Player of the Week honors) were Cam Heyward, who had eight tackles and a sack that gave him 5.5 for the season, good for second place on the team behind Watt’s 12.5, and he continued to be one of the most productive interior defensive linemen in the NFL this season.