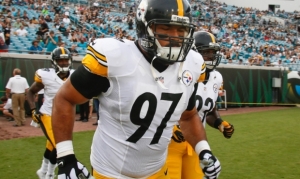 When the Pittsburgh Steelers’ defense is clicking and playing in the dominant fashion fans have become accustomed to over the years, it normally goes back one thing first and foremost; pressuring the quarterback.

For all the talk about poor secondary play last season, a strong case could be made that the unit’s 33 sacks, lowest total for the franchise since 1988, was the primary culprit for a less than stellar year from the defense. After years of watching the likes of Joey Porter, Jason Gildon, LaMarr Woodley and James Harrison wreak havoc as pass rushing specialists in Dick LeBeau’s legendary zone-blitz schemes, the well went dry in LeBeau’s final year.

Under new defensive coordinator Keith Butler, the Steelers are getting back to their old ways, but aren’t necessarily leaning on outside linebackers to be solely responsible for getting sacks. In fact two defensive ends, Stephon Tuitt and Cameron Heyward are contributing mightily to a sack total that has the Steelers on track to surpass the 50 sack threshold for the first time since 2008.

Tuitt leads the team with 3.5 sacks while Heyward has chipped in with two. That only tells part of the story when looking at these talented young bookends who are bringing a whole new dimension to the Steelers pass rush.

For Tuitt, his development as a second-year player, first as a starter, comes down to being more comfortable and playing fast. With all the physical tools necessary to be a force for the Steelers, Butler is allowing Tuitt to be aggressive and react, and it’s paying dividends in a big way for the Steelers’ defense.

Along with his sack total and consistently getting pressure on the QB, Tuitt is also among the team leaders in tackles with 22. His emergence has made the transition away from long time starter and fan favorite Brett Keisel a little easier as Tuitt continues to shine.

Heyward faced his own challenge replacing an all-time great when he was picked in the first round in 2011. Attempting to fill the shoes of Aaron Smith was not easy, but now Heyward is carving out a niche as one of the better 3-4 defensive ends in football. Coming off a season where he tied for the team lead with 7.5 sacks, Heyward has been a dominant force in all areas of the game so far this season.

Much like Tuitt, Heyward has been the complete package at defensive end, adding 17 tackles and a forced fumble to go along with his two sacks through the first four games of the season. Seemingly around the ball every down, Heyward’s still impressive stats don’t do his play justice.

The ability of the Steelers bookends to play at such a high level has forced opponent’s offensive lines to scheme differently than they would have when the pass rush came mostly from the outside linebackers. Now with Heyward and Tuitt legitimate threats to get to the quarterback on every play, offensive tackles can’t simply focus on players like Harrison and developing OLB’s like Jarvis Jones and Bud Dupree.

This should only help players like Harrison, Jones and Dupree throughout the course of the season, and with Heyward and Tuitt adding a new dimension to the Steelers pass rush, it might help the Steelers push for the lead the league in sacks for the first time since 2010. 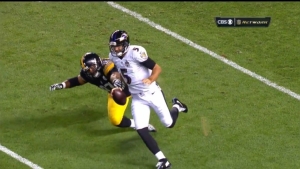 Also, click on over for a great read from Jon Ledyard, Steelers Depot, on Cam’s play vs. Baltimore.