Kudos for the D continue to pour in. In case you missed any:

Ray Fittipaldo gave his grades for the D Line:

Defensive line: With Stephon Tuitt on injured reserve, the Steelers are going to have to rely on two of their oldest players to generate pressure up front. And on Sunday, Cam Heyward and Tyson Alualu didn’t act their age. Alualu, 34, had five tackles and a quarterback hurry while Heyward, 32, had four tackles and a very important sack. He dropped Josh Allen for a 6-yard loss, which set up Miles Killebrew’s blocked punt on the next play.

Ben Roethlisberger was resplendent in a Pacific salmon-colored suit, easily the best-dressed Steelers player to walk out of Highmark Stadium late Sunday afternoon.

I’m giving the award to Cam Heyward. He was wearing a “Lambert Lunatics” T-shirt that had to be older than he was. The picture of the snarling, toothless Lambert reached out and grabbed you, or maybe belted you in the face.

Heyward’s T-shirt was appropriate on this late-summer Buffalo day. 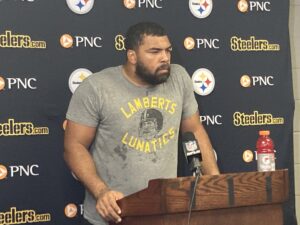 Lambert must have loved the way the Steelers defense played in a shocking 23-16 road win against the Buffalo Bills, “an AFC giant,” in Mike Tomlin’s words.

“We just played Steeler D,” Tomlin said. “I’ve got an expectation that our defensive unit is going to be in every football game like that. I’m just being bluntly honest with you.”

Bills quarterback Josh Allen, whom many consider the favorite for NFL MVP, was no match for the defense. Last season, he led the highest-scoring offense in the AFC. In a 26-15 win against the Steelers in December, he threw for 162 yards and two touchdowns in the second half.

But on this afternoon before a throbbing crowd of nearly 70,000 that was intoxicated with anticipation of a big season?

Allen led just one touchdown drive. He was sacked three times and hit eight other times. He lost a fumble after being sacked by T.J. Watt in the second quarter.

“I love playing with this group,” Watt said. “We fly around.”

The Steelers defense set the tone from the start, after the Bills’ Isaiah McKenzie returned the opening kickoff 75 yards to the Pittsburgh 24. After a 7-yard gain on first down, Cam Sutton tackled wide receiver Stefon Diggs for a 2-yard loss on second down. Heyward then batted away an Allen pass on third down, forcing a Bills’ field goal.

The Steelers defense made ’em all over the field 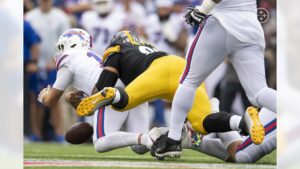 Heyward was virtually unblockable and had a sack, a quarterback hit, two pass defenses, a forced fumble and a fumble recovery. Minkah Fitzpatrick had 10 tackles. Tyson Alualu was a force inside with five tackles and a quarterback hit.

“I can’t say enough about our guys, their ability to smile in the face of adversity,” Tomlin said. “We faced a lot of challenges.”

It is only one game.

But what a game it was for the defense.

Watch as Missi and crew review the defense.

Steelers take on the Raiders in front of our home crowd!