Coach Tomlin summed it up best:

“It wasn’t a perfect performance by any stretch, but we’re not looking for perfect..We’re looking to be good enough to win.” (From an interview with Teresa Varley, Steelers.com. 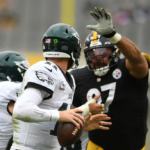 The Steelers defense recorded five sacks and two interceptions on Sunday. Pittsburgh is the fourth team since 2000 to register at least three sacks and an interception in each of its first four games of a season, joining the Bears (2018) and Broncos (2009 & 2016). (via Missi Matthews)

Listen to post game chatter from Cam and teammates HERE.

Read more on the win and check out some highlights!

The Steelers take on division rival, Cleveland next Sunday.