“We just have to keep working.” -Cam

GLENDALE, Ariz. _The Steelers continue to stay in the playoff hunt thanks to a 23-17 win over the Arizona Cardinals. The win improves the Steelers record to 8-5 on the season and keeps them in the wild card race.

The defense forced three Kyler Murray interceptions, something that isn’t common as the rookie quarterback had only six going into the game. Devlin Hodges managed the game cleanly completing 16 of 19 passes for 152 yards and a touchdown and no turnovers.

With 1:42 to play and no timeouts, the defense came up with their best stance of the day. Cam Heyward sacked Kyler Murray for a five-yard loss, and Bud Dupree came back with a sack for a loss of seven. On third-and-22 Steve Nelson had Larry Fitzgerald covered for the incompletion and on fourth down Joe Haden picked off Murray, his second interception of the day, to secure the win.

The Steelers went on an 11-play, 77-yard drive late in the game, and despite getting down to the seven-yard line had to settle for a 25-yard field goal by Chris Boswell. The field goal extending the Steelers lead to 23-17 with 1:42 to play.

T.J. Watt came up with a huge play, intercepting Kyler Murray in the end zone to kill a drive. But the offense sputter on the next drive, and on fourth-and-eight Jordan Berry decided to run instead of punt and was tackled for a loss at the 32-yard line The Cardinals took over and made it hurt. Murray hit David Johnson for a 24-yard touchdown to cut the Steelers lead to 20-17 with 6:44 to play in the game.

Haden jumped a pass from quarterback Kyler Murray intended for running back Chase Edmonds on second-and-5 from the Steelers’ 26-yard line and the Steelers took over at the 27. The offense responded with an 11-play, 73-yard drive in 6:06 for a touchdown. Quarterback Devlin Hodges hit wide receiver Diontae Johnson for the score on second-and-gal from the Arizona 2. Kicker Chris Boswell’s extra point gave the Steelers a 20-10 lead with 2:00 left in the third. Read MORE. 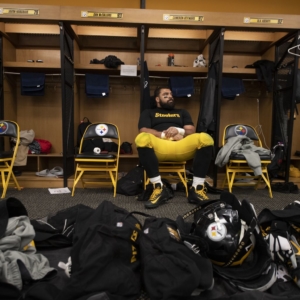 97:
Cam had three tackles and a sack. He was considered for Player of the Week honors, which went to “Duck” Hodges.