‘We’re capable of bringing anybody. That is our philosophical approach. We’re a blitz group. Anybody is capable of coming and that is just the code that we live by. It’s our personality. We’ll bring anyone. We’re an attacking group.’ – Coach Tomlin on the win.

“They won this game for us no doubt.”- Ben Roethlisberger on the win

Forty-six times a Denver Broncos quarterback dropped back Sunday. Nineteen of those times, he was hit.

It was that kind of day for Drew Locke, Jeff Driskel and the Denver offensive line in trying to contain a Pittsburgh Steelers passrush that is looking like it might be the NFL’s best through two weeks of the 2020 season.

The Steelers had seven sacks en route to improving to 2-0 with a 26-21 victory in their home opener Sunday. Twelve other times, they made contact with Locke or Driskel soon after he released a pass. Dupree, late in the first quarter, forced a Lock fumble – and forced him out of the game with a shoulder injury.

The Steelers also had a pass batted down at the line of scrimmage (from Tyson Alualu) and hurried throws by Locke and Driskel on numerous other occasions.

The Steelers have at least one sack in 59 consecutive games, the longest active streak in the NFL and in team history. 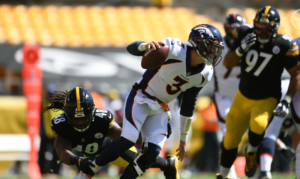 97 was disruptive all day with 4 tackles and .5 sacks.