In a thrilling come-from-behind win, the Steelers took fans on an up and down roller coaster ride on Sunday. According to Cam Heyward, the team never panicked or stopped believing…

Cam and his wife, Allie also posted an adorable photograph of their son: 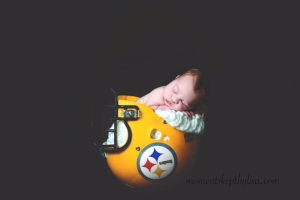 Today was a good day my son!!! Daddy won for u!! #lilironhead 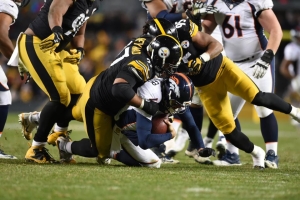 It shouldn’t be seen as a surprise that Steelers wide receiver Antonio Brown received the best grade for the Steelers in the team’s 34-27 win over the Denver Broncos Sunday. Brown scored two touchdowns, beating Chris Harris, Jr., on both, racking up 189 yards on 16 catches. If not for a historic 284-yard performance on 17 catches against the Oakland Raiders in Week 9, it would have been his best all-around game of the season. For that, football evaluation site Pro Football Focus gave Brown a 4.9 grade, extending his lead for the best overall grade at the position.

Defensively, Cam Heyward led the Steelers at 4.3. Heyward had a sack, forced several pressures particularly in the second half and drew a holding penalty that helped keep the Steelers’ defense ahead of schedule late in the game.

The Steelers knew heading into halftime of Sunday’s game vs. the Broncos that they just needed to “get it fixed”.

What happened after halftime was as decisive as it was dramatic.

But how did it happen?

The Steelers’ trailed 27-10 late in the second quarter and 27-13 at halftime against Denver on Sunday afternoon at Heinz Field.

Their 21-0 second half stole the show, sealed the deal and resulted, the players maintained, more from calm, calculated adjustments and productive exchanges between players than it did any outpouring of emotion in the locker room at the break.

“We just knew we weren’t playing right,” free safety Mike Mitchell said after the Steelers had finished off the Broncos, 34-27. “I actually huddled up (defensive end) Cam (Heyward), (strong safety) Will Allen and (cornerback) Will Gay right before halftime and said, ‘Hey, nobody yell, this is a big game, there’s no time for yelling. We gotta get it fixed and then go out there and play in the second half.’

“No one yelled. We acknowledged that we needed to get it fixed and we went out and played in the second half.”

A couple of players also mentioned some words from outside linebackers coach Joey Porter that resonated.

And Mitchell admitted Heyward required some convincing to get on board with the no-yelling approach.

“A little bit,” Mitchell said. “Cam’s a screamer but in a good way. He’s always doing it for the good of the team but at this point I just didn’t want anyone that may have been feeling down to feel more down so I just wanted to say ‘no screaming.’”

“We all just settled down,” he said. “I don’t think anybody played out of character (in the second half). I thought we all just kept battling and understood if we get the stops our offense can put up points.

“I think there were just a lot of mental errors and a lack of energy in the first half. We can’t have that again but it was a great teaching too. Communication (was an issue in the first half) and then along with that the energy was just lacking because of it. We have to grow from that and gotta learn but you need these types of games and you gotta win them.”

A Steelers’ win over at the Ravens (4-10) on Sunday, coupled with a New York Jets (9-5) loss to a New England Patriots (12-2) team that can secure home-field advantage throughout the playoffs with a win, would clinch a second consecutive playoff berth.

A first-round bye still is out there as well as the division title and even the coveted fifth seed that would match them up with the AFC South winner.

“If we continue to win and continue to do the things we have been accustomed to doing, we put ourselves in a good spot. You really can’t just look at what is going on here or there. You take care of your business, and you are in.” – Heyward