‘These are critical games’ 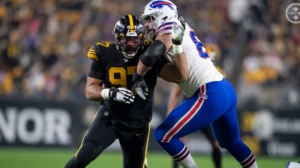 With two games remaining, the Pittsburgh Steelers still hold onto the last playoff spot in the AFC. That’s one consolation that came out of an otherwise unsatisfying performance Sunday night at Heinz Field when the Steelers failed to grab onto a higher seeding.

The Steelers couldn’t protect a three-point second-half lead and dropped a 17-10 decision to the Buffalo Bills, denying them a chance to take over the No. 5 spot in the playoff chase.

“Man, we know how to make it hard,” defensive tackle Cameron Heyward said. “It’s as simple as that. I know we’re in good playoff position, but crap doesn’t matter when you lose these games. These are critical games.

“We have to think this is the last time we lose.”

Thanks to Tennessee’s loss to Houston, the Steelers (8-6) cling to the No. 6 spot and control their playoff fate.

In order to advance to January, they’ll have to win on the road, finishing the regular season with games at the New York Jets and Baltimore Ravens. They hold the tiebreaker over the Titans (8-6).

Cam had another monster game with eight tackles and a pass batted down at the line of scrimmage.