They are 3-0 for the first time in 10 years and only the third time in Mike Tomlin’s tenure.

Their defense continues to torment opposing quarterbacks, even an elusive one such as Deshaun Watson, and come up with a takeaway when it matters most. 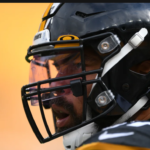 The Steelers’ defense pitched a second-half shutout while limiting the Texans to 51 total net yards and two first downs, and coming up with the game’s only turnover, an interception by nickel cornerback Mike Hilton that set the table for what became the game-winning drive.

Roethlisberger appeared in his 221st regular-season game, which broke a tie with Hall-of-Fame center Mike Webster and elevated Roethlisberger into sole possession of first place on the Steelers’ all-time list.