The Bus is rollin’ on to Canton!

Congrats to one of the best backs in Steelers history! – Cam, on Jerome Bettis becoming a member of the Pro Football Hall of Fame Class of 2015.

His NFL playing career ended with a trip back home to Detroit, for Super Bowl XL, and now he will enter football immortality as Jerome Bettis was elected to the Pro Football Hall of Fame.

Bettis was selected as a member of the Class of 2015 that was announced on Saturday night, becoming the 23rd member of the organization elected into the Pro Football Hall of Fame.

So happy to be amongst the games greatest players!! My Family and I are truly honored and blessed! I want to thank the my teammates, the Steelers organization and MOST of all the fans! 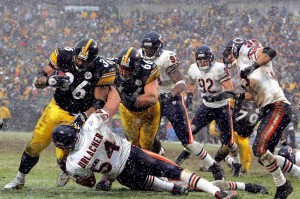 Before this game, he told the Oline, “I’m warning you my brakes don’t work!” He ran over several of us that nite!