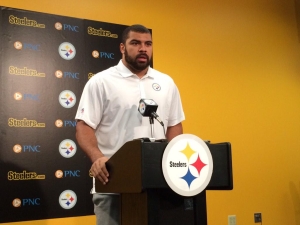 DE Cam Heyward is the winner of the 2014 ‘Chief Award’ for his cooperation with the media.

Cam Heyward is in just his fourth season, but has the respect and admiration not only of teammates, but of everyone in the Steelers organization for his approach to the game, his commitment and his demeanor off the field.

He is the type of player who, as they say, ‘gets it.’ He has respect for the game, respect for those who played before him, and those he plays alongside.

“I know through you I can portray my message,” said Heyward, who thanked everyone from the writers, to the cameramen to the public relations staff. “I think in Pittsburgh we have the best of everything. You get our point of view across.

“It’s a blessing. Any time you even get to be nominated for an award that goes along with The Chief it’s just humbling. It doesn’t come easily or lightly. We have a lot of great guys that want to be upfront and honest with you.”

Heyward is the type of guy Art Rooney Sr. would have loved. He is a Pittsburgh guy, born in the city, someone who embraces the history of the team, admires those like Joe Greene who played before him, and understands the legacy and foundation they laid. He also understands what comes with being an NFL player, and that is being accountable to many, including the media.