fter being down early, the Steelers fought back and defeated the Cleveland Browns, 20-13, at Heinz Field to improve their record to 7-5 on the season, while the Browns drop to 5-7. The win keeps the Steelers in the playoff hunt with four regular season games remaining.

Devlin Hodges made his second NFL start, guiding the offense with a 30-yard touchdown pass to James Washington, while Benny Snell added a one-yard touchdown run.

The Browns had one final shot with 1:45 to play. Minkah Fitzpatrick broke up Baker Mayfield’s first down pass. Bud Dupree was called for roughing the passer giving the Browns a first down. Joe Haden came up with the play of the game when he intercepted Mayfield to secure the win.

Read more on the Steelers site. 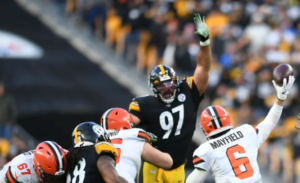 Cam was once again considered for Player of the Week honors. He had six tackles, a half-sack, and a fumble recovery.

Relive the highlights and listen to post game comments.

The Steelers travel to Arizona to take on the Cardinals.