Steelers in control in win over Bengals 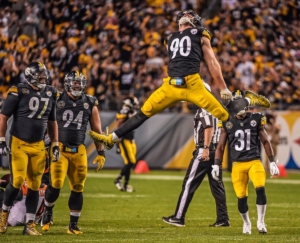 A swarming defense rattled Andy Dalton in the second half with two interceptions and four sacks. The offense came out on fire, and never took their foot off the gas as Le’Veon Bell finished with 35 carries for 134 yards. Chris Boswell hit five field goals and a special teams’ play that was truly special on a fake punt turned into a 44-yard pass completion, all which added to the win.

More on the defense from Adam Bittner, Pittsburgh Post Gazette:

Secondary creates problems: Cornerbacks Joe Haden and William Gay came up with big second-half interceptions. Haden’s pick was his first as a Steeler after being acquired in the preseason, giving him validation of some quiet good work he’s been doing in the past few weeks. 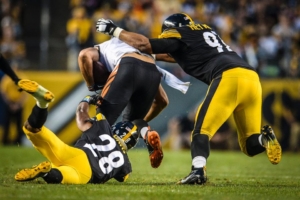 Front seven gets stronger late: The Steelers’ guys up front were a little leaky early, giving a lot of running room to Bengals rookie Joe Mixon and failing to get a ton of pressure on quarterback Andy Dalton. That changed in a big way after halftime as Cincinnati abandoned the run and the Steelers’ pass rushers were able to pin their ears back. Suddenly, Dalton and the Bengals couldn’t do anything as Alualu, Dupree and T.J. Watt were among those who registered sacks. Nice adjustments from those guys.

Catch some great video hightlights, courtesy of the Steelers.

Cincinnati managed just one first down in the second half, much of which Dalton spent on the run or throwing picks. Joe Haden collected his first interception with Pittsburgh when he made a juggling grab that set up Boswell’s field goal. William Gay added one later in the third quarter on an ugly overthrow by Dalton. (AP)

Cam had a great sack on Bengals QB, Andy Dalton!

Great weekend for #TeamHeyward as Michigan State AND the Steelers won!