“I saw what those guys did without me. And I just want to make sure I hold up my end of the bargain.” – Cam 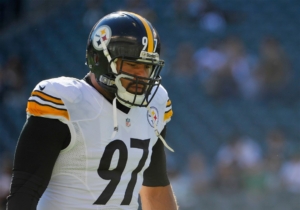 The Steelers will add another pass rusher to their lineup this season. Rookie T.J. Watt? Yes, him too, but they’re expecting a good, veteran starter in addition to bolster their defense.

And Cam Heyward is delighted to rejoin them, or will be when he does.

Heyward pulls on his uniform No. 97 and practices but has yet to be involved when the full offense and defense go at it in these spring, non-contact drills. He has recovered from the chest surgery that caused him to miss the second half of last season and all three playoff games, but there is no sense of urgency for him to push it in June.

“It’s tough because it’s like a hill I keep climbing, new things to accomplish,’’ Heyward said after the Steelers concluded the second of four weeks worth of spring drills. “I really just want to get back onto that field but I need this to get back on the field.

“It’s just getting stronger. By [training camp], I’ll be more than 100 percent. I’m just trying to get my muscle memory back — seeing the plays, getting back into the stance. I haven’t been in a stance for so long. I just have to get accustomed to that again.”

It will not take quite so long for the Steelers defense to get used to having one of its best players return.

Heyward has not played since Nov. 13, the day his 2016 season ended during a 35-30 loss to the Dallas Cowboys. He thought little of his pectoral muscle that was torn that day and finished out the game.

“I thought it was just a sprain,” he said. “I’m thinking the next day it might be a little sore and I could gut it out. Here, I needed surgery immediately. It kind of broke me down.”

Conversely, the Steelers did not break down. Somehow, they thrived without Heyward. They did not lose another game right up until they ran into their New England wall. Anyone who thinks they did not miss their starting right defensive end did not watch that 36-17 spanking the Patriots put on them in the AFC championship game.

Not long afterward, Steelers president Art Rooney II said one thing they need to do in 2017 is apply more pressure on the quarterback.

Heyward is pretty good at that; he led them in sacks in each of the past two seasons and might have made it three had he not missed the final seven games. His presence on a full-time basis at right defensive end should go a long way into uplifting a defense still trying to rediscover itself.

“It means a lot. He’s not only one of our physical leaders but vocal leaders as well,’’ said third-year linebacker Bud Dupree, who helped pick up the slack with 4.5 sacks in December upon his own return from an injury that cost him the first half of the season.

With Heyward and Dupree playing a full season, with Stephon Tuitt at left end and James Harrison rotating at right outside linebacker with No. 1 draft pick T.J. Watt, the Steelers’ pass rush should not only improve, but have balance.

“I think it’s all about just taking steps forward,” Heyward said of a defense still transitioning from the great ones earlier this decade and beyond. “I think a lot of guys progressed and I think we just have to continue to do that. I want to be nothing more than an addition. I saw what those guys did without me. And I just want to make sure I hold up my end of the bargain.”