That’s what I’m talking about! Fight! – Cam, on the come-from-behind win.

The Steelers kept their win streak alive with the win in Jacksonville.

It doesn’t matter how you start, it’s how you finish.

And for the Steelers, they finished in dramatic fashion, coming from behind to defeat the Jacksonville Jaguars, 20-16, for their sixth straight win. The victory improves their record to 7-2-1, and 15-1-1 on the road in their last 17 games, keeping them on top of the AFC North.

“Really, really awesome fight and the bottom line in our business is winning. We took care of business,” said Coach Mike Tomlin. “Style points were ugly, or quite few, but we got the job done.

“You just grow when you are faced with adversity like this in a hostile environment and you are not playing great and you find ways to get it done. From that standpoint really excited. We have some lessons to learn. You tip your cap to that group, particularly their defense. We got a big play and that got us back into it.

“I also tip the cap to our defense. They were put in some tough situations. They were out there a lot of snaps. They didn’t blink. They held the fort until our offense got going. Then with No. 7 you have a chance.

“I am really proud of the group.” 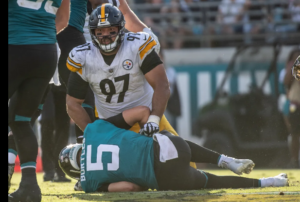 The defense shut down the Jaguars in the second half, allowing just 38 yards rushing. They silenced Blake Bortles, who completed just 10 passes for 104 yards and was sacked six times, including two each by Javon Hargrave and T.J. Watt, and one by Cameron Heyward and Vince Williams.

Watch highlights from the win!

Congrats to Javon Hargrave on being named Steelers Digest Player of the week:

Hargrave had four tackles, plus two of the Steelers’ six sacks, and during the Steelers’ frantic comeback in the fourth quarter he batted down a pass on a third-and-11 to get the defense off the ball and the ball back to the offense. Hargrave is the Steelers Digest Player of the Week.

#Steelers DT Cameron Heyward (@CamHeyward) brought down Jacksonville QB Blake Bortles for a sack (minus 7 yards) in the fourth quarter, increasing his 2018 sack total to 5.5 and career number to 42.5.

He has recorded at least one sack in back-to-back games (2.0 vs. Carolina).