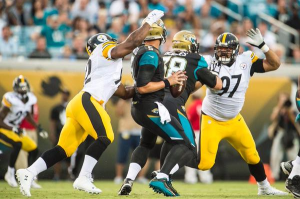 The Steelers have played two preseason games so far. Neither resulted in a win, but the starters have not played more than series or two.

The team lost to Jacksonville last night by a close score of 23-21.

The next preseason game is August 23 against the Green Bay Packers.

Training camp resumes tomorrow, and will wrap up on August 22.

You know what this means…the 2015 regular season is right around the corner!

The Pittsburgh Steelers are one of the NFL’s most storied and history-rich franchises, so they should well appreciate the following slice of their lofty statistical record: When defensive coordinator Dick LeBeau, safety Troy Polamalu, defensive lineman Brett Keisel and cornerback Ike Taylor exited stage left this offseason in Pittsburgh, they took with them a staggering 53 seasons worth of Steelers defensive expertise and experience.

In fact, this will be the first year since 2001 that no one in that accomplished foursome will be employed by the Steelers; the team has had at least one of those names on the payroll for 18 of the past 23 years—a period that dates back to 1992, when LeBeau was first hired by the team.

So, welcome to 2015 in Pittsburgh, which is clearly the dawn of a new era in terms of the Steelers’ proud tradition on defense. But will all that change—however necessary it might have been—be invigorating or inhibiting in the Steel City? And will it lead to the needed resurgence for a unit that ranked just 12th and 18th the past two seasons in terms of yards allowed, the worst two finishes for a Steelers defense since LeBeau was hired as coordinator in 2004?

“It’s a challenge, but I think it’s a challenge competitors embrace,’’ Steelers ninth-year coach Mike Tomlin said Wednesday at Pittsburgh’s training camp, two days before his team resumes its preseason schedule with Friday night’s game at Jacksonville. “I don’t fear that transition. That’s part of ball. Those men that were here with us for a long time performed at an extremely high level. Those are special men and are a special group, but you move on. Like sands through an hour glass, so are the days of our lives. Know what I mean?

If there’s one consensus in camp, it’s that fifth-year defensive end Cam Heyward would be voted most likely to lead in 2015, given that he has developed a top-tier game (a career-best 7.5 sacks in 2014) that now supports his natural leadership skills. And it doesn’t hurt that the Steelers bestowed upon him a six-year, $59-million contract extension last month, thereby stamping him as a franchise cornerstone. Heyward now can walk the talk.

“Cam Heyward is emerging I think as that guy, and it’s more outward with Cam, it comes more natural with him,” Steelers general manager Kevin Colbert said. “Now he’s playing good enough that he can justify getting vocal because he backs it up with his own play. But all this has to happen over time and it has to be organic. You can’t say, ‘Well, you’re the leader. They’ll tell you. The players will tell you who the leaders are.”