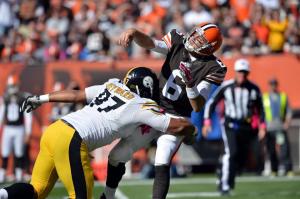 See? Still unanswered. But if guesswork will suffice, look for the Steelers defensive linemen to do more than just occupy blockers and clog lanes starting in 2015. Look for them to penetrate and make plays that way. Which only makes sense, because that tactic would suit this personnel.

This group is younger and more athletic than recent incarnations of the defensive line, and it only would make sense to marry the scheme with the talent. Twelve candidates will report to training camp, with the likelihood being that half of them will get cut.

It’s not correct to call Cam Heyward a finished product, but he is a known commodity. Based on his play and his presence, it’s fair to see Heyward as part of the foundation for this new-look defense. Once a unit riddled with thirtysomethings, the 11 starting players on defense during OTAs and minicamp had an average age of 26.1.
“We’ve got to find some guys, but we’re not just looking to plug holes,” Heyward said. “As much as we’ve had guys here, we’re looking for guys to be mainstays and looking for guys to produce every day. We’re not just looking for someone to stick in there and say, ‘Hey, just go out and play.’ We’re looking for guys to be successful. That’s the way we have to look at it. You see the history and traditions around here, we’re not going to settle for anything less.”

With regards to Heyward, Stephon Tuitt and Steve McLendon , it’s not an issue of making the roster as much as it is having a positive impact on the team. And that means as individuals as well as parts of the unit.

Tuitt came to the Steelers as a 20-year-old second-round draft pick on May 9, 2014, and by the end of his rookie season he was looking like a playmaking defensive end. Big guys who can run are valuable components of a defensive unit, and Tuitt’s blend of size and relentlessness make him a potential factor every time the ball is snapped.

McLendon, 29, is going into the final year of his current contract, and this follows a 2014 season in which a shoulder injury forced him to miss four games in October and November. He returned to play in the final four games of the regular season, all of which the Steelers won to claim the AFC North Division title. McLendon had surgery this offseason to repair the damaged shoulder.

“I went ahead and got it fixed,” McLendon said. “Now I’m back healthy, and I can use it. I regained all my strength and range of motion. I can help my team out now. I don’t have to worry about any more setbacks or time off. I don’t have any worries. I took the necessary steps to get ready for this year.”