Praise coming in for the Steelers 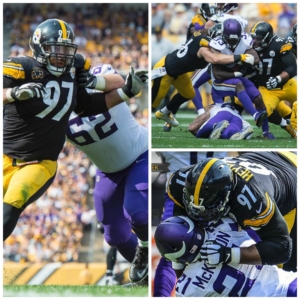 Ryan Shazier and Vince Williams have taken on the moniker of “Shake and Bake.”

Shazier has the shake in his step and Williams “likes to bake people,” according to Shazier.

But they realize they’re not as shakey or bakey without the guy who’s taken on the moniker of “Captain.”

Yes, Cameron Heyward is back, and so, apparently, is a dominating Steelers’ defense.

For the second consecutive game, the Steelers held an opponent to exactly 237 yards of total offense, which is more than 100 yards per game better than the average they allowed a year ago (343).

The Steelers stifled the Minnesota Vikings, 26-9, and allowed only one touchdown, a 1-yard run by C.J. Ham in the third quarter after the “lulled” Steelers’ defense allowed a 25-yard run by Dalvin Cook, who otherwise gained 39 yards on 11 other carries.

The key was the return of Heyward, who missed the last nine games last season with a torn pectoral muscle.

Heyward made his return to Heinz Field with a dominating performance. He drew a holding penalty on the first series, tackled Cook for a four-yard loss on the second series and pressured Case Keenum into a wild incompletion to a wide-open Stefon Diggs on the third series.

Heyward was credited with only six tackles, but he forced running backs to take difficult paths throughout the game and drilled Keenum twice to force incompletions.

“I’m always fired up,” said Heyward. “But this was the home opener and (I) got to play for DMR (the late Dan Rooney) in the first game he wasn’t here. We missed him out there, and I thought we played with energy.” 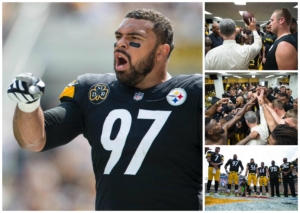 Joe Greene, the Steelers’ Hall of Fame defensive tackle, was on hand against the Minnesota Vikings to help celebrate the memory of the late Dan Rooney and serve as honorary captain before the game.

For most of the game, the Vikings must have felt as if Greene were still playing for the Steelers. At least, it certainly looked that way every time they tried to block defensive end Cam Heyward.

The Vikings and their rebuilt offensive line couldn’t quite figure out how to control Heyward, especially in the first half when he was putting on a performance that looked a whole lot like the way Greene would dismantle offensive lines in the 1970s.

Need more? Check out these articles from Teresa Varley and Bob Labriola.

Photos courtesy of the Steelers and Peter Diana, PPG.