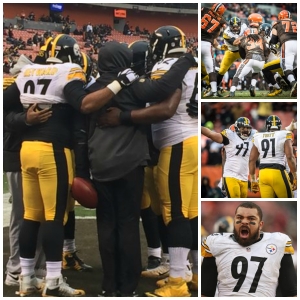 “I wouldn’t say it’s a relief. All we could do was control what we could  You’ve got to thank the Bills for doing their part. We can’t take this for granted. We have to make the most of this situation. We’re going to play some quality teams from here on out.” (from Dale Lolley)

And, from Will Graves:

The slate is clean. All the injuries, the early season suspensions and the meltdown in Baltimore mere footnotes now.

For the better part of three months the Pittsburgh Steelers stressed all they needed was a chance. That a spot in the playoffs — any spot really — is all they required to prove they were as good as the sum of their considerably talented if occasionally erratic parts.

“Sitting here as a Pittsburgh Steeler, that’s the expectation to make the playoffs and hoist the Lombardi (Trophy),” wide receiver Antonio Brown said. “For us to get an opportunity to go back, it’s a step in the right direction.”

Even if that initial step could come without running back DeAngelo Williams, who sprained his right ankle in Sunday’s 28-12 win over Cleveland and whose status for Saturday’s wild-card game at Cincinnati is uncertain. Williams greeted his teammates in the giddy postgame locker room with his injured foot in a protective boot but tweeted on Monday “hopefully not for long.”

The 32-year-old tied for the NFL lead with 11 rushing touchdowns while spending most of the year as the feature back with Le’Veon Bell limited to six games thanks to a suspension and torn ligaments in his right knee. If Williams can’t go, Pittsburgh could sign someone off the street — as it did last year when the Steelers brought in Ben Tate for a wild-card loss to Baltimore after Bell hyperextended his left knee in the regular season finale against Cincinnati — or throw Fitzgerald Toussaint or Jordan Todman into the mix.

The two combined for all of 64 yards rushing this season and their playoff experience is limited to two nominal carries by Toussaint last winter while playing for the Ravens.

It’s less than ideal, but the Steelers (10-6) are hardly quibbling.

“I feel that we are getting stronger,” linebacker Lawrence Timmons said. “We just need to have that chain-linked fence effect.”

Something that — when Pittsburgh can get out of its own way — makes the Steelers as dangerous as any team in the AFC. The issue is in doing it with any sort of consistency. Pittsburgh roared through a three-week stretch last month in which it beat the Colts, the Bengals and Denver only to follow it up with a mysteriously flat performance in Baltimore, a loss that forced the Steelers to beat the Browns and get a little help from the Buffalo Bills just to reach the playoffs.

Scoreboard watching isn’t the way Pittsburgh envisioned reaching the postseason for the 28th time since 1970. Pittsburgh-based restaurant chain Primanti Brothers rewarded the Bills for the assist by sending an order of sandwiches — complete with French fries and cole slaw on top — to Buffalo as a “thank you.” The Steelers, meanwhile, are going to make sure the reprieve amounts to more than a one-week cameo.

“We were in the position last year, made the playoffs, and lost in the first round,” linebacker Arthur Moats said. “We don’t want that to happen again.”

It’s happened each of the last two times Pittsburgh played in the wild-card round. The Steelers haven’t won a playoff game since the 2010 AFC championship. A misstep in Cincinnati would mark the franchise’s longest postseason victory drought since Franco Harris’ “Immaculate Reception” in 1972 gave the team its first-ever postseason triumph.

Getting into mid-January — and beyond — is the standard at a place where the players pass a half-dozen shimmering Super Bowl trophies each day. The Steelers have worked on putting together a shot at a seventh by withstanding the loss of Bell, center Maurkice Pouncey, left tackle Kelvin Beachum and four-plus games without Roethlisberger. After nearly giving it away against the Ravens, their destiny remains in their capable if sometimes inconsistent hands.

The team that played in the first game of the year — the Hall of Fame exhibition against Minnesota in early August — remains in contention to play in the last despite an uneven path. They’re not perfect, not by a long shot. Yet they feel they’re just as good as anybody.