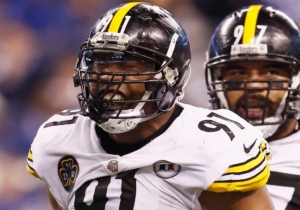 Cam Heyward was credited with just two tackles — one solo — in the Steelers’ 20-17 victory against the Colts Sunday in Indianapolis. Pro Football Focus, however, argues he was easily the best player on the field for the visitors.

The stats-centric website that grades players on every snap they play in a given game issued a grade of 92.7 out of 100 for Heyward, writing of his performance:

Heyward was an absolute menace on the interior of the defensive line for the Steelers Sunday. Heyward consistently was beating the Colts guards and center in with his pass rush. Heyward finished with four hurries on 24 pass-rushing snaps with an 87.0 pass-rushing grade. He was also great in run defense, forcing himself into the backfield and forcing the running backs to cut out of their intended holes. Heyward had one stop and finished with a 91.3 run-defense grade.

Heyward got a lot of help, too. PFF ranked fellow defensive end Stephon Tuitt as the Steelers’ third-best player with an 83.7 grade. Combined, they made life very difficult for the Colts, who managed fewer than three yards per carry on the ground and didn’t score after a touchdown that put them ahead, 17-3, early in the third quarter.

Cam and teammates spent time at the PGH Food Bank passing out food for Thanksgiving.

Great night @PghFoodBank for the @CamHeyward Thanksgiving food distribution. Thanks to the City of Duquesne Police and Duquesne Mayor elect @nickole_nesby for helping out. 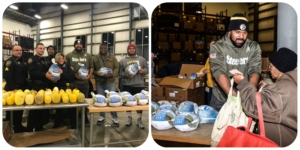 Photos: Teresa Varley and The Steelers