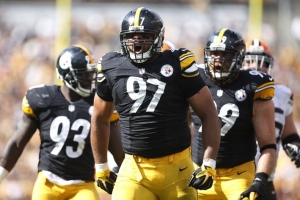 From Jeff Hartman, Behind the Steel Curtain:

The old regime is slowly fading away from the Pittsburgh Steelers’ defensive roster. Brett Keisel is gone, and so are names like Ryan Clark, James Farrior, Casey Hampton, Aaron Smith, Ike Taylor and possibly Troy Polamalu. As James Harrison is returning to the team in a ‘supporting role’, the defense is in need of a leader.

As Mike Tomlin spoke to media at the owners meetings in Phoenix, AZ, he was posed the question as where the leadership will come from on the defensive side of the ball. He didn’t have to think long to respond.

“I think that’s been clearly defined a year ago. Cam Heyward is the core central leader to our defense and a good one. He’s a good player. He’s got good football character. He’s hard-working. He’s a good communicator and he’s vocal. It’s been fun to watch him ascend over his years with us to that role. I look forward to him continuing to grow in that role.”

Saying Cam Heyward is a good player is similar to putting Ben Roethlisberger in the non-elite category when talking about quarterbacks. Heyward might have started his career slowly, but the past two seasons he hasn’t been anything short of great.

Heyward had 5.0 sacks in 2013 and followed that up with a 7.5 sack performance in 2014, which was tied with Jason Worilds for the team lead. Heyward has gone beyond proving his ability on the field and has solidified his role on the Steelers defense as every bit of the leader Tomlin described.

Heyward is in the club option of his rookie contract, and is certainly atop the list of players who are due for a contract extension heading into next season. After Tomlin’s comments, there is no way the organization allows Heyward to reach free agency and risk losing their defensive leader.