Meet the Steelers Walter Payton NFL Man of the Year… 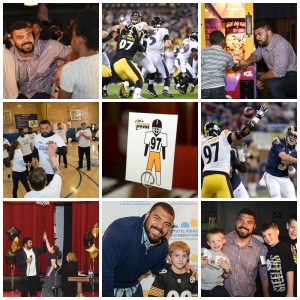 Congratulations to Mr. Heyward on being named Steelers Walter Payton Man of the Year!

Be sure to read below to find out how we can help Cam earn a $20,000 donation to his charity.

Cam Heyward is too young to have ever seen the legendary Walter Payton play football, born two years after Payton retired after playing 13 seasons for the Chicago Bears. But he isn’t too young to know about Payton, to know what he meant to the game of football both on and off the field.

Heyward’s late father and former NFL running back, Craig ‘Ironhead’ Heyward, entered the NFL one year after Payton played his last game. He knew all about the Chicago Bears great and idolized him. And he passed his appreciation for what Payton meant to the game along to his son, Cam.

So when it was announced on Wednesday that Heyward is the Steelers 2015 nominee for the Walter Payton NFL Man of the Year, the fifth-year defensive end was humbled.

“To even be mentioned with a name like Walter Payton is an awesome thing,” said Heyward. “He was one of my dad’s heroes and he is one of mine. He was a great person off the field as well.”

Every NFL team names a winner, and they are all eligible to be the NFL’s Walter Payton Man of the Year, presented by Nationwide. Three finalists will be selected and the winner announced the night before Super Bowl 50 during the NFL Honors awards show.

The award recognizes a player’s off-the-field community service, as well as his playing excellence. And Heyward definitely is a standout in both areas.

“He was a humanitarian,” said Heyward of Payton. “You don’t do it for the award. You do it because you love giving back. That is something I just want to consistently try to do because I am in a fortunate situation.”

Heyward is in his third year serving as the Steelers representative for the United Way, carrying on a tradition that began 42 years ago when the NFL and United Way became partners to assist the communities they serve. Franco Harris was the first Steelers player to lend a hand to the cause, and others who have played Scoring Drive roles in the relationship include Steelers founder Art Rooney Sr. and team President Art Rooney II. Heyward takes pride in carrying on that tradition.

“They have all taken pride in the community and being involved with the United Way,” said Heyward. “I want to continue that and keep on trying to improve upon it. It’s so important to be involved. There are so many people who helped me get where I am today. I am very blessed and in a humbling position. I want to have a chance to give back to my community.

“Playing for such a prominent, historical team like the Steelers you see so much involvement in the community and what it means. It’s just continuing to give back. Being a part of the United Way and the Pittsburgh Steelers I have to hold myself up to a higher standard. I don’t want to let the Steelers name or United Way name down. I take a lot of pride in that and make sure I am holding up my end.”

He holds up his end, and then some. In his role as the Steelers representative Heyward speaks to local businesses and organizations, as well as his teammates, sharing with them the mission of the United Way, the endeavors the organization is focusing on and in some cases encouraging them to donate as individuals and companies, while in others thanking them for their continued support. He also attends events focused on helping everyone in the community, from kids to the elderly.

“He has been amazing, especially as a young player with what he has done,” said Steelers President Art Rooney II. “He has a maturity beyond his years. He has a great commitment to being a part of the community, and you can see that with his work with the United Way. He has been outstanding. He is a guy that is always available to help out when somebody needs something.”
He took that off the field commitment to the next level last spring when he launched The Heyward House Foundation, with the main beneficiaries being KidsVoice and the Boys & Girls Club in Pittsburgh. He hosted a birthday party for himself last May, but the guests of honor were those from KidsVoice, who enjoyed a fun-filled day at Dave & Busters and received goodies. This fall he hosted his first annual “Steel and Steaks” to benefit the foundation.

“With great success comes a lot of responsibility,” said Heyward. “That is something you have to cherish. Not everybody is as privileged as us today. You should always have a chance to give back because you can affect people’s lives in ways not a lot of people can.”

His contributions don’t stop there. He is active in supporting cancer awareness to honor his father, who lost his battle to the disease in 2006. He also serves as the honorary chair for the Cystic Fibrosis 65 Roses Sports Auction and the Caped Crusaders 5k, benefitting the Cancer Caring Center. In addition, he attends the team’s community events, as well as ones hosted by his teammates.

Oh, and he is having a really good season too. Heyward, voted a team captain this year by his teammates, has five sacks this season, improving his career total to 20 sacks. He has 41 tackles, a pass defensed and a forced fumble this year and has been the definitive leader on the defensive line with his play.

He is a durable player, never missing a game and has a streak of 75 consecutive games played, tied for fifth-longest among NFL defensive ends.

“He has such an amazing daily commitment,” said Coach Mike Tomlin. “He makes a decision before he walks in these doors on a day to day basis to give it all he has got. Not that we talk about that. It’s just very evident in his actions. He gives everything he has on a daily basis.

“That is what the Walter Payton Man of the Year should reflect. Not only professionally, but personally, on the field, off the field, he pursues greatness continuously.”

HELP CAM’S CAUSE: To further celebrate and support the nominees, Nationwide launched the inaugural Charity Challenge. The social media contest will give fans the opportunity to show support for their favorite nominee as well as offer a chance for players to secure an additional $20,000 for their cause.

Fans are invited to vote for their favorite nominee by using that player’s unique hashtag on any social media platform. The player whose unique hashtag is used the most by December 31, 2015 will receive a $20,000 donation to their charity of choice, courtesy of Nationwide.

Steelers fans can vote for Heyward using the hashtag, #HeywardWPMOYChallenge.