“Yes, I’d love to be recognized for it,” Heyward said. “Recognized from my peers, my coaches, coaches and players around the league, and the fans. It’s something that I strive for.” 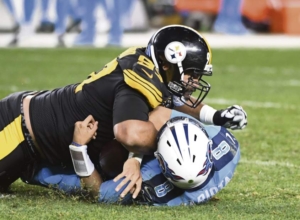 Pro Bowl ballots won’t be counted for another month. That doesn’t mean some early campaigning isn’t being done in the Steelers locker room on behalf of their defensive captain.

“Cam Heyward for Pro Bowl!” a teammate yelled as he walked past Heyward’s locker after the Steelers’ win against the Tennessee Titans on Thursday night. Heyward couldn’t suppress a sheepish smile.

But that was far from the only teammate expressing such a sentiment in the wake of Heyward’s two-sack game that helped fuel a dominant 40-17 victory.

“We need to get him (to the Pro Bowl),” fellow defensive end Stephon Tuitt said.

“He should be a Pro Bowler,” said linebacker Bud Dupree. “Absolutely.”

And while the Pro Bowl has lost much of its cache to fans, being named to the AFC roster would mean a lot to Heyward, a seventh-year pro.

“Yes, I’d love to be recognized for it,” Heyward said. “Recognized from my peers, my coaches, coaches and players around the league, and the fans. It’s something that I strive for.”

Heyward’s path to a Pro Bowl roster spot is difficult because of the position he plays (3-4 defensive end), so earning such recognition would be all the more gratifying.

Sacks traditionally take a disproportionate weight in recognizing the NFL’s top front-seven defensive players. And because he’s classified as a defensive end, Heyward is compared to those smaller 4-3 ends who get the opportunity to rush the passer more often.

“He’s like a D-tackle,” Dupree said. “D-ends, some of those guys, they’re linebackers, and they’ve already got double-digit (sacks).”

Of the 10 NFL players with more sacks than Heyward’s seven, three are listed as linebackers, and the other seven are ends playing for 4-3 teams.

“It’s tough because we play so much of subpackage (nickel) that I almost am a D-tackle,” Heyward said. “Sometimes you want to be looked at as a D-tackle, especially when I’m going up against outside linebackers that are at a D-end spot (in balloting). But that’s just the cards we’re dealt.”

Pro Football Focus grants Heyward his wish and classifies him as an “interior defender” and considers him the 10th-best such player in the NFL, third-best among AFC players. Heyward is the Steelers’ highest-rated defensive player by PFF, edging Tuitt and linebacker Ryan Shazier. Only Antonio Brown and David DeCastro have higher grades on the team.

While run-stuffing is considered his strength, Heyward leads the Steelers in sacks and has six in his past seven games. According to NFL Next Gen Stats researcher Ethan Young, Heyward’s “pressure rate” (when rushing the passer) of 13.8 percent is the seventh-best in the league for an interior defensive lineman.

But evaluating Heyward’s game goes much deeper than sack totals. There are intangibles such as leadership (elected captain three consecutive seasons) and durability (his 608 snaps played are fourth most in the NFL among defensive linemen). Heyward has appeared in more than 85 percent of the Steelers’ defensive snaps, and in what can be interpreted as a sign of his team-first mentality the 78 special-teams snaps he’s played are the second most of any of the top 60 NFL defensive linemen.

Heyward has played in 97 of the Steelers’ 106 games since he was drafted with the penultimate pick of the first round in 2011.

The nine games he missed? Last season. To Heyward, that’s made his self-proclaimed “great year” all the more rewarding, particularly in the wake of the scare when he had the wind knocked out of him and had to sit out a play late in Thursday’s game.

“I want to make sure I made up for lost time,” Heyward said. “… I appreciate every game and every play because it can be taken away from you that quickly. And I’m just trying to make the most out of every play.”