Last day of no pads was a HOT one

The Steelers held their last practice without pads today, and boy was it a scorcher! 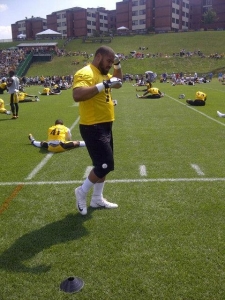 Cam Heyward, most likely wondering how hot it was going to get by the time practice ended. — Mike Prisuta (@DVEMike)

Cam spoke to the media today regarding the defense:

What’s the vibe been like so far?
I think it’s been pretty copasetic. Nothing has changed. We still haven’t really put on the pads yet, so it’s hard to judge.

Re: William Gay and Lawrence Timmons both said there’s no single leader on defense:
Exactly. We have a lot of guys who are leaders in different ways and it doesn’t fall on one guy’s shoulders. That’s the way we like it, because we can hold each other accountable and focus on the task at hand.

How much progress has Stephon Tuitt been making?
He’s light years ahead of where he was last year. Now, he’s just looking to take it out on the field. He didn’t work that hard in the offseason for nothing. He put in the work and he’s more confident in the plays. He’s learning how to not only get himself set, but others as well.

Can you address the changing role for the defensive line and how that affects the linebackers?
I think there are some instances where we will create one-on-ones, open up our nose tackles and three-techniques. Our linebackers have to be able to get off of blocks and the lineman have to be able to flow to the ball.

Read more, from Jim Wexell, on what we may see from Coach Butler’s defense this season HERE.

Quote of the day:

“Oh, we’re still gonna get a lotta the dirty work — don’t get it wrong.“– Cam Heyward,on the hot storyline of the DL freed up to make plays. (Quote via Chris Adamski (@C_AdamskiTrib ).

The players have Tuesday off and will return on Wednesday for the first practice in pads.