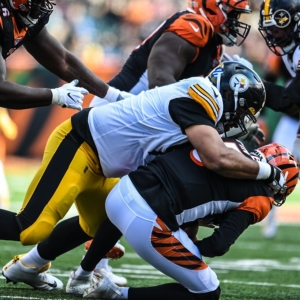 The Steelers defeated the Bengals 16-10, completing a season sweep of an AFC North team.

The Steelers remain in the playoff hunt after a 16-10 win over the Cincinnati Bengals at Paul Brown Stadium. The win improves the team’s record to 6-5 on the season.

Two huge turnovers by the defense late in the game, including a forced fumble by Devin Bush that Minkah Fitzpatrick recovered and a strip-sack and recovery by Bud Dupree helped the team secure the win. The defense held the Bengals to 86 yards rushing, and 192 yards in the air.

The running game came alive with 160 yards rushing, including 98 yards by Benny Snell. Devlin Hodges came into the game on the second possession of the second half after Mason Rudolph struggled, and led the Steelers on their only touchdown drive of the game when he hit James Washington for a 79-yard scoring strike.

“I just felt like our offense needed a spark,” said Coach Mike Tomlin. “Mason wasn’t doing enough. Duck came in and provided us a spark. We’ll see what next week holds, next week.”

When they needed it most, the defense came up with another huge play, just like they have all season. Bud Dupree sacked Ryan Finley, forcing a fumble, and came up with the recovery giving the Steelers the ball back at the Bengals 21-yard line.

Another strong showing by the defense, with as three and out while the Bengals possessed the ball for just 12 seconds, gave the offense another shot. They made it count when Chris Boswell hit his third field goal of the day for a 16-10 lead.

The defense gave the offense a gift when Devin Bush knocked the ball out of Tyler Boyd’s hands after a completion, and Minkah Fitzpatrick recovered and returned it 36 yards. But the offense wasn’t able to produce, keeping the score at 13-10.

The Steelers took the lead with 11:59 to play in the game when Boswell hit his second field goal of the day, connecting from 47 yards out, for a 13-10 lead. The Steelers were aided by two pass interference calls on B.W. Webb, which combined for a total of 34 penalty yards.

The Bengals erased a second-half deficit on a nine-play, 68-yard drive in 6:03 that ended with a 27-yard field goal by kicker Randy Bullock that tied the game at 10-10 with 5:07 left in the third quarter.

Hodges came on for Mason Rudolph with 12:36 left in the third quarter and the Steelers trailing, 7-3. Hodges’ first pass went for 11 yards to running back Jaylen Samuels and Hodges’ third attempt found wide receiver James Washington for a 79-yard, catch-and-run touchdown. Washington cut back on cornerback B.W. Webb and stiff-armed Webb out of the way on the way to the end zone.

Kicker Chris Boswell’s extra point gave the Steelers a 10-7 lead with 11:10 left in the third.

The Bengals took the lead immediately after falling behind in the second.

Quarterback Ryan Finley connected on successive snaps to wide receiver Tyler Boyd, the first on a play-action deep ball for a gain of 47 yards to the Steelers’ 15-yard line, and the second on a fade into the end zone for the game’s first touchdown. The three-play drive covered 69 yards in 1:26.

Bullock’s extra point put Cincinnati ahead, 7-3, with 1:55 left prior to halftime.

The Steelers broke the ice with 3:21 remaining in the second on a 26-yard field goal by Boswell.

Cam had had six tackles, a sack, and four total hits on the quarterback.

Fun stats from the Steelers:

.@CamHeyward  has recorded 6.5 sacks this season, which is the third most of any defensive tackle in the NFL.

Please remember to get your votes in to send Cam and his teammates to the Pro Bowl! Voting is easy, free and unlimited! 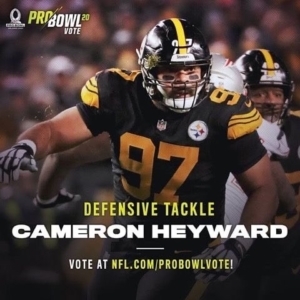