Honoring Rooney with a win at Heinz Field

The Steelers played their first home game of the season today, paying tribute to the late Dan Rooney: 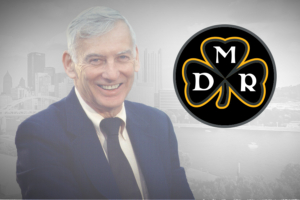 The Steelers honored the legacy of late Chairman Dan Rooney prior to Sunday’s game against the Vikings at Heinz Field, in a manner that befitted the legend he was, as well as the humble individual he was.

Heinz Field was respectfully quiet, and tears were visible among Steelers’ fans, as a video was shown on the scoreboard, a touching tribute to the life Rooney led, and the impact he had on so many.

Throughout the regular season players will sport a patch on the right side of their jerseys with Rooney’s initial’s DMR, which stands for Daniel Milton Rooney, lovingly enveloped in a black and gold shamrock to honor, remember and show love and respect for the man who was more than an owner, but family to the players.

Prior to the game a flag was raised outside of Heinz Field at Gate A, with an image of the patch displayed on it. And fittingly it was raised by two players who had a close relationship with Rooney, Mel Blount and Rocky Bleier.

After the pregame ceremony, the game against Minnesota was ON! 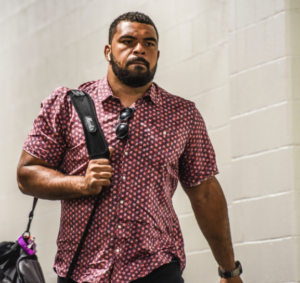 The Steelers defense rose up again, this time stifling a Minnesota Vikings offense without its starting quarterback in a 26-9 victory in their home opener at Heinz Field that began with an emotional tribute to the late Dan Rooney.

The Steelers are 2-0 with a game at 0-2 Chicago next Sunday.

Cam Heyward had a dominating performance and played as if he had to make up for the absence of Stephon Tuitt all by himself. He had six tackles, including four that netted a total of minus-6 yards, and two quarterback hurries. The Vikings rushed for 91 yards on 20, but the only breakdown came when Dalvin Cook bounced a 25-yard run to the outside that was originally ruled a touchdown. Grade: A-

Your Steelers Digest Player of the Week is… 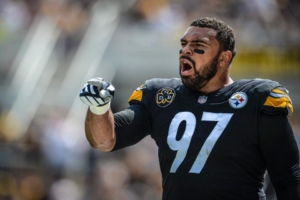 It has been one of the underrated storylines of this season, but never let it be said that having a healthy Cam Heyward in the lineup is underappreciated. With Stephon Tuitt

out as a result of the biceps injury he sustained in the regular season  opener one week ago, and with the weather taking a toll on many of the bigger men in the game, Heyward rarely came off the field and led the defense in a manner befitting his status as a team captain.

After missing nine regular season games and three postseason games in 2016 with a pectoral injury, Heyward returned for 2017 with the idea of making up for that missed time. Hayward posted four tackles and a sack in the opener against the Browns in Cleveland, and then against the Vikings he finished with six tackles, including one for loss, and he also was credited with two pressures in a 26-9 victory that put the Steelers at 2-0. Cam Heyward is the Steelers Digest Player of the Week.