Heyward: ‘You can’t go up and down on a roller coaster…’ 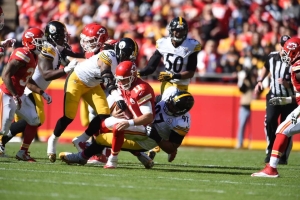 You can’t go up and down on a roller coaster. It’s gotta be consistent. If it’s not, it’s gonna be our Achilles heel the whole year.  As a defense we gotta get more turnovers. We gotta stop the run. We didn’t stop the run today, we missed tackles. When you do that, you’re at a disadvantage. – Cam, from his post game interview.

There were positives from the game:

WHAT WENT RIGHT
* With the help of a 25-yard punt return by De’Anthony Thomas, the Chiefs offense eventually moved to a first-and-10 at the Steelers 19-yard line on their first possession, but they ended up settling for a field goal after Antwon Blake broke up a pass for Albert Wilson at the 3-yard line and then a pressure from James Harrison forced a quick throw to Charcandrick West that was incomplete after Robert Golden came up and made a hit as the ball arrived.

* Following the Steelers’ first turnover in seven quarters, the defense did not allow a first down. A 9-yard completion from Alex Smith to Chris Conley was followed by a Cam Heyward sack that set up a third-and-6. Another incomplete pass by Smith on third down set up a 54-yard field goal attempt by Cairo Santos that was long enough but wide right.

Cam had four tackles and a sack during the game.

Cam Heyward: Heyward has been a beast in recent games, even if his stats don’t always reflect it. He’s moving linemen back, chasing down screen passes and hurrying quarterbacks. Heyward finished with a sack and four tackles against the Chiefs.

If Alex Smith had kept that ball, Cam Heyward would have ate him. In the backfield in a flash.

The Steelers will take on the Bengals next Sunday at Heinz Field. If you’re attending the game, be sure to #StandWithCam! Learn more HERE.