Heyward: “We have a long time to think about this” 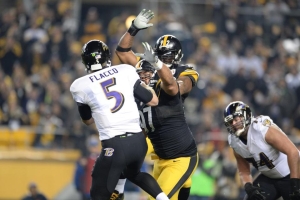 The Steelers lost to the Ravens last night by a score of 30-17. The season-ending loss was heart breaking, but Heyward also pointed out how much greater the loss was in that the team may lose several veterans during the upcoming offseason:

“This team is not going to be the same next year and it breaks my heart. I don’t know what it’s going to look like and it’s hard to talk about that”– Cam, from his post game press conference.

Nothing better symbolized how crushing a season-ending loss can be than the sight of defensive end Cameron Heyward hugging Brett Keisel before the latter left the Steelers locker room at Heinz Field for perhaps the final time. Keisel missed the last four games after sustaining a triceps injury and there is a question of whether the Steelers will bring the veteran back for a 14th season.

Heyward wanted to win for Keisel, who has been his mentor, and he had a hard time letting go — both literally and figuratively — as Keisel exited the locker room after the Steelers’ first playoff loss to the Ravens. “He’s meant so much to me,” said Heyward, who had wiped away tears after a long embrace with Keisel. “It just sucks going out this way. I’d love to have him back but we just don’t know what that entails.”

The season did not end the way we wanted it to, but we can take pride in the fact that this team never gave up. Heyward stepped up as a leader on defense and as a mentor to the younger players.

Read about the game HERE.

From Jim Wexell, Steel City Insider had a message for Steeler Nation:

I ask that you take pride in the athletes who are laying it all out there for you and are serving as good, even spectacular, role models for our kids.

We will have a season ending recap posted soon!