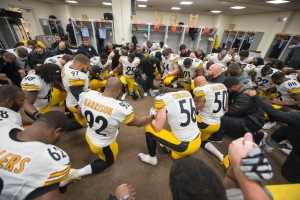 To say last night’s game was a wild one just does not do it justice. The words “Fantastic Finish” and “Shocker” come to mind.

Even after linebacker Ryan Shazier forced a fumble and cornerback Ross Cockrell recovered it, the outlook wasn’t promising.

“It was dire,” head coach Mike Tomlin assessed of the situation the Steelers faced with 1:23 remaining in the fourth quarter and the ball at the Steelers’ 9-yard line and the Bengals leading, 16-15, in Saturday night’s AFC Wild Card Game at Paul Brown Stadium.

It became a little less so when quarterback Ben Roethlisberger, out since injuring his right shoulder on the final play of the third quarter, re-entered the game.

Nine plays, 74 yards, two defensive personal-foul penalties and a 35-yard Chris Boswell field goal later, the Steelers were celebrating an improbable, 18-16 victory and looking ahead to this coming Sunday at Denver.

Cam and the team never gave up:

Can you talk about the ending to the game?
“I’m happy to be on the winning side of this game. Tip your hat to them, but until it’s zero on the (clock), you keep fighting.”

They were planning on running out the clock. What were you guys thinking as a defense?
“We had three timeouts and all we needed to do was stop the ball. We knew they were going to run the ball, which is fine. We just ripped at the ball. It was a great opportunity.”

On the fighting and penalties:

“You just have to be level-headed. We really tried to stress to our side, stay off the field and don’t pick up the penalty. You have to be disciplined.”

Ben Roethlisberger suffered an injury during the game, but somehow was able to return to lead the game winning drive.

“It’s something special for him to get out and perform like that. I don’t know any other quarterback who can do that. It’s special.”- Cam

Cam has also offered to personally deliver ice to Big Ben’s house, if needed. Ben may just take ya up on that 97! 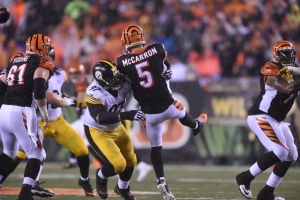 97 was very disruptive during the game, with a sack and a forced fumble.

The Steelers held the Bengals scoreless in the first half, allowing just two total first downs and 56 total yards of offense in that period. The last time the Steelers defense recorded a postseason first half shutout was the 1979 Divisional Playoff game against the Miami Dolphins – 36 years ago.

The Steelers defense recorded 3.0 sacks, the first three-sack postseason game since Super Bowl XLV vs. the Green Bay Packers. Those sacks came from three different defenders – DE Cameron Heyward (1.0), LB James Harrison (1.0), and LB Jarvis Jones (1.0). Heyward and Jones each pushed the Bengals back 11 yards with their sacks, while Harrison moved the line of scrimmage two yards back. (From Steelers.com) 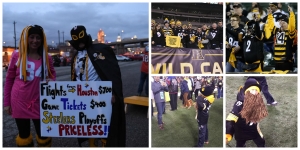 As usual. Steelers Nation was in full force last night. Their support is amazing at home or away!

If you haven’t already, be sure to join Steelers Nation Unite NOW! They are holding a contest to win tickets to the game in Denver!

The Steelers travel to Denver to take on the Broncos on January 17.